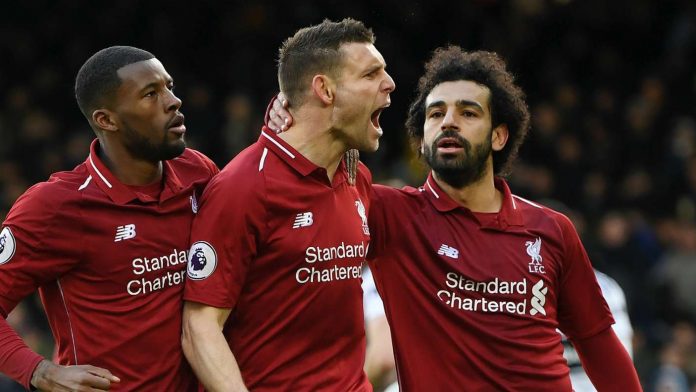 The two-time Premier League winner is confident that the Reds have enough quality to secure this year’s trophy.

James Milner is convinced that Liverpool have what it takes to get their hands on a first top-flight title in 29 years.

The Reds are locked in a pulsating battle with Manchester City for the Premier League trophy and face arguably their toughest remaining domestic fixture on Sunday when Chelsea visit Anfield.

Milner – who won the Premier League twice during his time with City – has seen enough from his team-mates, though, to suggest they can pip his old side to the trophy this season.

“I think we have what it takes,” he told reporters. “You have seen how we’ve improved over the past few years.

“You look at times this season when we have perhaps not played so well but still got results.

“We have great determination to keep going when things are not going well. So, it is all there – the quality is there – and it’s a young team as well.

“It doesn’t mean we will get over the line but we are getting closer each year and we’ve got a good chance. We just have to take care of our games.

“We are up against what a lot of people say is one of the best-ever Premier League teams in Manchester City, the players they have, the points they have.

“There is no tug of emotion from me towards City because I played for them. Just to win the league again would be amazing. I had a great five years there, won every trophy in England but my motivation now is to beat a very good team.”

Liverpool are two points ahead of City at the Premier League summit but Pep Guardiola’s side – who face Crystal Palace on Sunday – do have a game in hand.