Home PUO NEWS Wike to GOC: PDP defeated You and Your Party 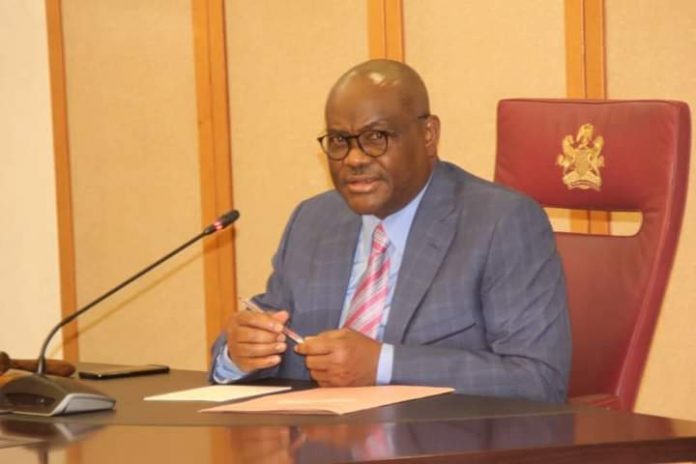 ▪says nobody planned to bribe the GOC

▪insists that GOC 6 Division is involved in oil bunkering

Rivers State Governor, Nyesom Ezenwo Wike has declared that the Peoples Democratic Party ( PDP) defeated the General Officer Commanding ( GOC) of the 6 Division of the Nigerian Army, Major General Jamil Sarhem and his political party during the 2019 General Elections, saying that the bribery allegation by the embattled GOC is false and a mere face-saving measure.

Governor Wike said that the embattled GOC recently appeared before the House of Representatives Committee on Army, but never made any such allegation, because nothing like that took place.

He reiterated that the GOC runs an oil bunkering scheme, which cannot be swept away by flimsy allegations.

He said: “I thank you for the political support you gave me when there was no hope. At a time when the GOC came to kill Rivers people, but you stood firm to say , you will not agree. Yes he may have killed our people, but we will continue to protect our votes.

“They say they will remove me through the Tribunal, but we defeated them during the elections. If it is to conduct elections, they will never win.

“Someone who says he never met me before and has never been to Government House would say I am fighting him because I tried to bribe him with billions of naira. The GOC has been fully involved in oil bunkering. He should explain his involvement instead of the false allegation.

“The House of Representatives Committee on Army was here , he could not say he was bribed. He is saying this because he is involved in oil bunkering. They know it is correct. Elections that we defeated you and your party, why would I have to pay bribe. We defeated you in that election. The man you have not met, how could he have offered to bribe you?”

Governor Wike said he will continue to promote Rivers first at all times. He said that the interest of Rivers State is ahead of all other considerations.

The Governor also berated the Director General of NIMASA, Mr Dakuku Peterside for negative comments against the Government and People of Rivers State, when he is part of the atmosphere of insecurity being fueled by cultism.

He thanked members of the Former Rivers State Executive Council for their contributions to the development of Rivers State.

He said: “It has been a rewarding experience and I am quite impressed that one worked with these persons of capacity.

“All the achievements we recorded were made possible because you worked”.

She assured Governor Wike of her unflinching support, noting that she will always work for the success of his Administration.

Secretary to the Rivers State Government, Sir Kenneth Kobani moved the motion for the dissolution of the State Executive Council, which was seconded by Former Commissioner of Transport, Hon Michael West.

Highpoint of the Validictory Session of the Rivers State Executive Council was the presentation of Special Congratulatory Card to the Governor by Former Members of the dissolved Council.

Full transcript of conversation between Abba Kyari and Hushpuppi obtained by...