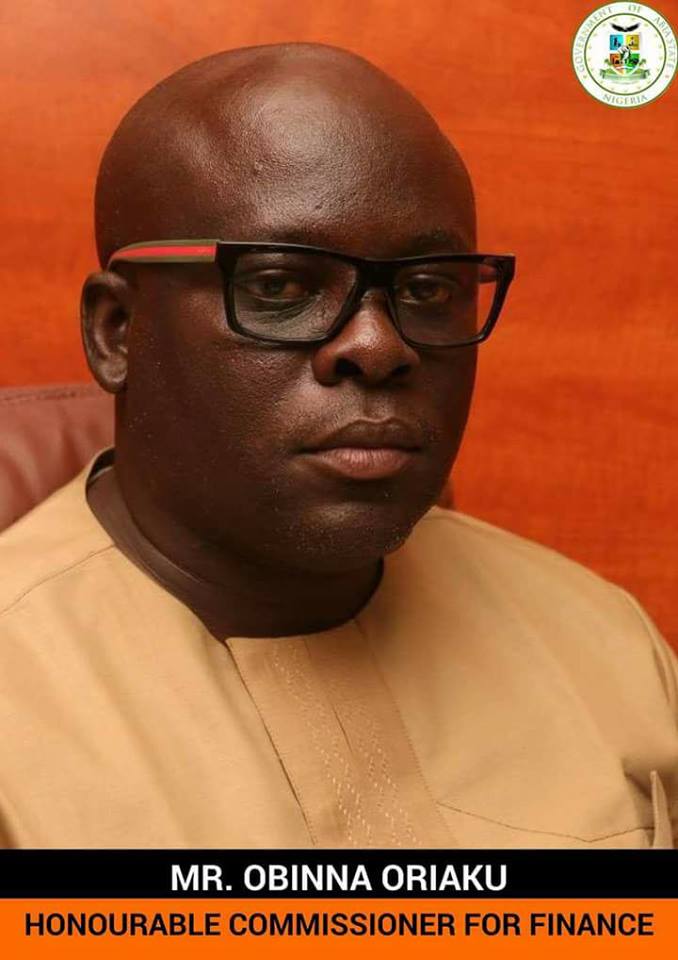 Public service in Abia State, for decades, was seen as a goldmine, where custodians and managers of state institutions arrive with plates, spoons and knives to cut their share of the cake. People join public service with their drain pipes ready to plug into the public treasury pipe and draw as much state resources as possible to their private pockets without considering the effect on the wider society.

Expectations of many in Abia till date remains that money should be shared by hand instead of using it for developmental purposes thereby putting pressure on the lean resources of the State. Meeting such expectations resulted to placing little or no emphasis on infrastructure development and even industrialization for the people of Abia State.

Conscious of this fact, on assumption of office, Gov. Ikpeazu decided to chat a new course for the state. To deliver on his desire to positively change the narrative of the state, the ministry of finance, being the lifewire and the engine room of project incubation needed to be repositioned to meet the obligation of his administration in the midst of changing socio-economic realities.

The Governor saw the need to restructure and reform the entire financial system of the State, hence the appointment of Mr. Obinna Oriaku to be the Commissioner for Finance, who himself is seasoned banker with public sector management experience spanning over several years with Enugu State Government.

While it can’t be said that it is now uhuru, with regards the the reform agenda of the Governor, a lot has been achieved quietly with more expected.

At the inception of the present administration, there was no central data of the entire Abia civil servants. Salaries were paid according to information provided ministries and agencies. This gave room for existence of many ghost workers and padding of salaries was the order of the day. The system also encouraged fraudulent engagement of unqualified personnel and other illegalities which gave rise to over bloated workforce with the attendant financial implications.

To strengthen the wage management system, the State ministry of finance under the supervision of the current Commissioner for Finance, Mr. Obinna Oriaku, embarked on Biometric Verification and automation of the payroll system of workers in the State which brought every civil servant under one basket. On completion of this exercise some issues such as payment of “ghost worker” salaries, padding of salaries, multiplicity of people receiving salaries from various units of the government were addressed to a reasonable extent. During the time under review, 320 workers in secondary education management boards (SEMB) who were supposed to have retired but still receiving monthly salaries were shown the way out.

This exercise assisted the State greatly, as the monthly wage bill was reduced from the average of N3b to N2.3b monthly. Thus, from this exercise alone a savings of about N700m monthly was achieved and now channeled to priority areas of the State for economic development and opportunity created for employment of new genuine workers.

To put matters into perspective, the State Government through the ministry of finance embarked on Pensioners Verification Exercise (PVE)/Biometric Capturing and automation of their payment. This has helped the State to identify non-retirees in the system. Through the verifications, about 131 teachers who were supposed to have retired were identified while others were discovered in other sectors; MDAs.

Thereafter, the e-payment system was adopted. This led to the simultaneous payment of all pensioners through their banks. Today, pensioners receive their pension funds at the comfort of their respective homes instead of gathering under trees to beg for their statutory dues.

As if these are not enough, the government is equally migrating from the analogue pension scheme to the Contributory Pension Scheme. This social intervention scheme is aimed at saving some funds for the workers through their banks for pension and returning benefits on retirement dates for the continuation of smooth and hitch-free life experience after work exit.

Before now, the State had multiple accounts in different banks which also encouraged diversion, fraud and manipulation of the financial system. With the introduction of Treasury Single Account (TSA) in the State, we now run a single account through the FAAC Bank which has helped the State to properly manage its account for the benefit of Ndi Abia, resulting in the improved efficiency we experience today in the State.

The reform agenda was extended to the parastatals in the state as these agencies were only functioning to satisfy the pockets of their executives and their board members . The only partially functional Parastatal at inception of the administration was Abia State University((ABSU). Today we have introduced automation to other revenue generating Parastatals .. Abia Poly/ School of Health today are fully automated as they have migrated from the era of collecting school fees cash in examination halls.
This automation was also introduced in Abia State University Teaching Hospital (ABSUTH) to discourage cash handling in payment for Consultations and drugs procurement. We have received reports on possible sabotage of this process and the government is poised to rejig this process again and should be supported.

This was another comatose parastatal on life support before Dr Ikpeazu’s emergence. With the reforms already implemented, this unit is gradually coming back to life. With the increasing Internally generated revenue IGR) they have been able to remodel and reopen many dead general hospitals in the State including Aba General Hospital. Full automation of their processes is currently ongoing. The government is hopeful that soon HMB will be fully functional with sustainability programs put in place. Stakeholders support is needed to ensure these change initiatives are fully realized.

Before now, Abia was a pariah State where development partners and multilateral agencies seem to avoid owing to certain issues, not limited to non transparency in government dealings. However, after the visit of the Governor and Commissioner for Finance and the their presentation to the World Bank’s Country Director and executives in 2016, the perception index of Abia changed from negative to positive.

This account for the positive influx and support of donor agencies to Abia. These agencies include
RAAMP, NEWMAP, CCT, CBN/ AACS,
YESSO, FADAMA 3 and many others.

This has given rise to a number of positives. Today, Abia has received $54m, the highest among South Eastern States from NEWMAP with more being expected for the execution of the N30b Umuagbai Uratta Road Junction through Ngwa road flood water control project at Aba.
On RAAMP, Abia has been adjudged among the first 6 best States in their disbursement link with the expectation of $60m for new projects.

The ministry of finance saw the need to partner with more federal government agencies hence the payment of counterpart funds covering 2012-15 which was outstanding payments with UBEC. Today, the State has almost cleared the backlog of those counterpart funds, which in turn has given Abia the assessment of over N6b for construction and remodeling of over 300 primary schools.

Today, there is Public Sector Governance being piloted by the economic team of Abia State Government with template for project, policy implementation and programme review support.

Currently, with the hard work put in place by the economic team coupled with the Government’s engagement in the IPAS standard with button-top/needs assessment budgeting system with verifiable figures published online within the specified time frame etc, Abia has keyed into the States Fiscal Transparency, Accountability and Sustainability (SFTAS) programme and met the eligibility criteria. We are today one of the 8 States of the federation that is on the Disbursement Link Indicators stage of this development partner’s laudable programme.

To further strengthen the successes of this administration, the Commissioner for Finance led a delegation to the National Assembly House Committee on Appropriation, where he presented and justified the need for Abia State to be included in the national borrowing plan. After this successful outing, the State was included with the $200m AfDB facility which has been fully approved and the relevant jobs advertised with the AfDB.

IGR has been a major low point in the State’s efforts towards development. And this is fueled and sustained by deliberate frustration of government policies by few shylocks who held on to State funds and resources instead of supporting the government with its reformative efforts.

However, Abia State recently understudied the States of the federation that have done well in IGR development and came to the conclusion that the State needs to embark on reform and restructuring of the Board of Internal Revenue (BIR). This is expected to change the way businesses are done in each sphere, notwithstanding some vested interests ravaging our collective patrimony for years wishing the failure of these reforms in order for the State not to go beyond its current performance of over N1b as indicated by the bureau of Statistics.

These reforms have paved way for serious conversation and engagement with the leadership of the likes of NURTW, ASATOA and informal labour sector to be responsible for funds collection from their affected areas instead of private individuals who hitherto account for little or nothing to the State.

Above all, while the State Government continues with these detailed and painstaking efforts in revamping and revitalizing every aspect of the State socio-economic status as well as put smiles on the faces of the people, we once again encourage and enjoin Ndi Abia to remain steadfast and supportive of this visionary, virile and vibrant administration so that all the above stated gains can further be consolidated.

We’ll Use Our Votes Against Those Who Say Rivers Don’t Matter...