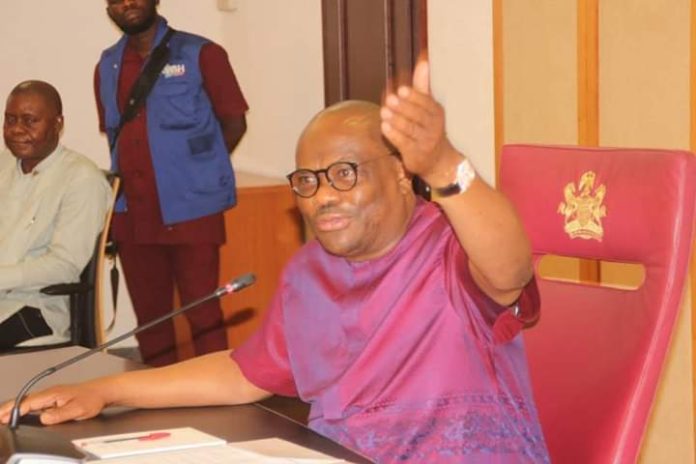 Rivers State Governor, Nyesom Ezenwo Wike has declared that his administration is working with security agencies to tackle rising insecurity and cultism in Ogoniland.

He said: “All of the persons involved in cultism are known by the community leaders. We are coming after them to restore peace to the Ogoni communities.

“This time, no effort will be spared. Attention in on the Ogoni area to check the rising insecurity. All through yesterday, the State Security Council met and resolved on the best way to tackle the cultists “.

The Governor charged community leaders to also work out modalities to tackle cultism, saying that the State Government will give them full support to achieve desired results.

He warned against the illegal removal of Government Recognised Chiefs by unauthorised persons. He said such illegal actions lead to conflicts that degenerate into insecurity. He regretted the situation in Eleme where a government recognised Traditional Ruler was illegally removed by some unauthorised persons.

Governor Wike said that the State Government is taking measures to reach out to Traditional Rulers who are not recognised by Government, so that they can contribute to the promotion of security in their respective communities.

The Governor, however, noted that part of the problem in Ogoniland is the planned resumption of oil production. He said that he has received a letter from the National Security Adviser on the commencement of production at OML 11. He noted that he was not duly informed on the process.

He added that going forward, the State Government and Ogoni people should be carried along on the OML 11 issue, saying that dialogue will yield better results.

He said: “I got a letter from the National Security Adviser. Part of the problem is OML 11. I have written back to them and said you did not inform me when you were going there. If you want to go into a community, tell me as a Governor. But even if there will be, we need to sit down and resolve issues.

“I have told the Federal Government that they cannot use Force in doing everything. We need to sit down and resolve issues. As a Government , we are losing Revenue no doubt, but the people must be involved so that everyone is part of what is happening . I will not support anything that will make Ogoni people not to benefit from their resources. I will not do anything to betray the people who have given me their mandate. I will never do that”.

He said cultism is not a way of life, but a criminal action that will be checked by the security agencies.

Chairman of the Supreme Ogoni Council of Chiefs, King Godwin Giniwa assured the Rivers State Governor that Ogoni people will support his drive to promote peace and security in the area.

Uche Nwosu: I won’t be manipulated by Okorocha