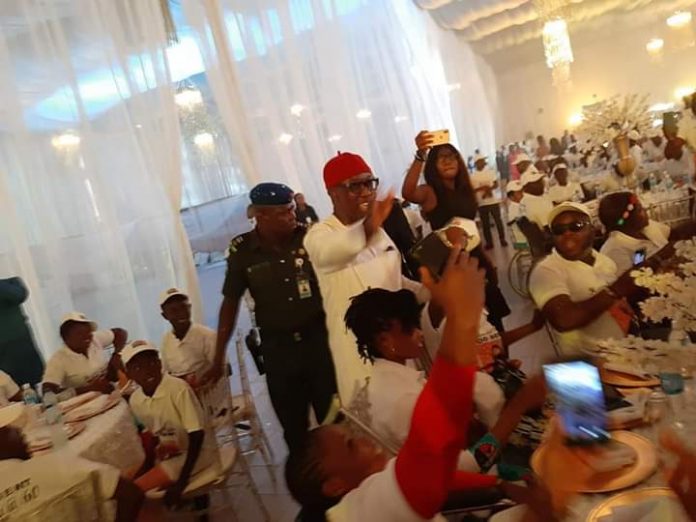 The celebration which saw a lot of people with disabilities in attendance, was also attended by the National Chairman of the Peoples Democratic Party (PDP), Prince Uche Secondus, Governors of Sokoto, Imo and Edo States, Alhaji Aminu Tambuwal, Sir Emeka Ihedioha and Mr Godwin Obaseki respectively.

Those who spoke at the occasion described the celebration as unique, noting that Governor Okowa is humble, focused and patient.

According to Governor Tambuwal, “Governor Okowa will remain the humble servant of the people; he is a good husband and a father, a gentleman, very honest and unassuming.”

“I congratulate the people of Delta for having him as Governor for a second term, and his decision to celebrate the birthday with people with disabilities is in his characteristics of giving hope to the hopeless,” Governor Tambuwal said.

To Sir Ihedioha, “Governor Okowa is calm to a fault but, you can only underestimate him to your own peril; he is also, a very humble man and we commend him for celebrating his birthday with people with disabilities. “

The Governor of Edo State was also, full of praises for Governor Okowa tracing his achievements to when he was a student of the Edo College, Benin City.

Former Governor James Ibori described the governor as a prayerful personality who believes that he cannot record success without God.

“I congratulate Governor Okowa; I thank God for your life; I thank God for your humility and we pray God will continue to uplift you because, I do know that you do everything with a clear conscience; continue to take decisions in the interest of humanity,” the governor said, adding, “you can be firm when it requires firmness and you can be fair when it requires fairness.”

Governor Okowa in his speech, thanked the organisers for making it a pleasant surprise, disclosing that his intention was to celebrate the birthday solely with people who are living with disabilities

“I want to thank God for keeping me alive; my mother died at 43 and growing up to attain 60, I thank God,” the governor said and used the occasion to also, thank his wife, Dame Edith and their children.

He disclosed that he decided to celebrate his 60th birthday with people with disabilities because, it was not their decision to be disabled, assuring that his administration will continue to pay special attention to their affairs.