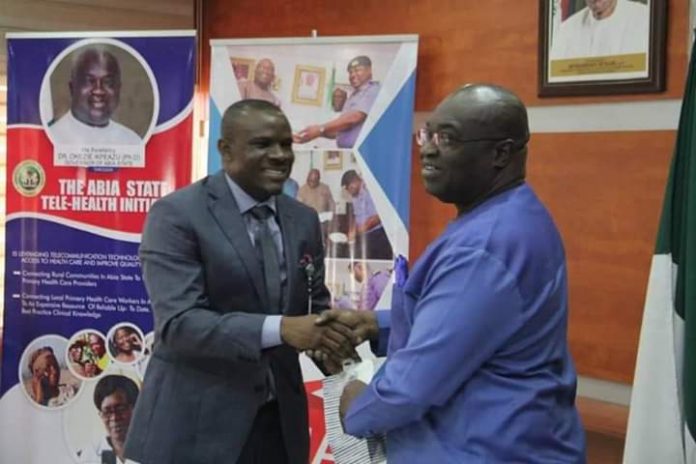 The Governor of Abia State, Dr Okezie Ikpeazu, has restated his plan to ensure that the state becomes the agro products value-addition hub for South East and South South.

The Governor stated this while receiving the management team of the Central Bank of Nigeria (CBN), Umuahia branch led by the Branch Controller, Mr. Michael Ogbu, at the Government House, Umuahia, on Monday.

He noted that the government is clearly focused on its plans and strategies in Agriculture as it is also aware of its constraints in land area. He revealed his plans to set up a cassava processing plant and the establishment of an ultra modern rice mill as the rice season is set to be flagged off by next week.

Speaking further, Dr Ikpeazu stated his awareness of the enthusiasm of the CBN in the area of poultry and oil palm production saying that the state is pioneering a novelle approach to poultry farming. He said the issue of poultry farming is very dear to the government as his administration is committed to sustaining the interest of the young farmers in poultry farming.

The Governor emphasized that Agriculture is the greatest employer of labour as it can furnish raw materials for industrialization if properly harnessed. He therefore stressed that the only way to get full benefits of agriculture in the State is by deploying science and technology and called on Abians to take full advantage of the fertile soil which the state is endowed with.

While noting the strategic position of the government in oil palm production as his administration has, in the past four years, raised four (4) million Oil Palm seedlings of Tenera species, Governor Ikpeazu said that the state was yet to get her fair share of support from the CBN as she did not get as much support as other states in the eastern region from the bank remarking that with the visit by the Central Bank of Nigeria officials to the Abia state Government House, it would open up opportunities to harness all available agricultural and job creation support of the CBN. He assured the Bank’s delegation of maximum support from the state as well as provision of additional land for housing of the workers and construction of access road to the proposed CBN estate in Umuahia.

Speaking earlier, the leader of the delegation and Branch controller of CBN Umuahia, Mr. Ogbu Michael, said the management came to liaise with the Governor on the implementation of Oil Palm Belt Initiative of the bank.

He informed that the initiative has the potential of providing over one hundred thousand (100, 000) jobs and expressed hope that the program would succeed in Abia since oil palm production is so dear to the Governor of the State.

The Branch Manager also informed that the apex bank recently launched a Clean Note Policy which aims at withdrawing dirty notes and urged all to approach deposit banks to change the notes.