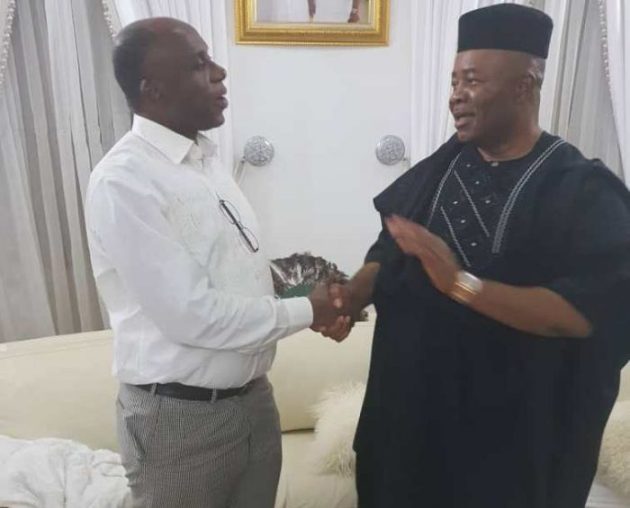 Nine ministerial nominees have enjoyed the ‘take a bow’ privilege at the screening by the Nigerian Senate on Wednesday.

President Muhammadu Buhari had on Tuesday, forwarded the names of 43 nominees to constitute his cabinet to the senate, eight weeks after he was sworn in for a second term.

According to the Senate President, Ahmed Lawan, the decision was in line with the long-standing tradition of the legislature that all former lawmakers nominated for appointments are given an automatic endorsement.

Unlike other nominees who were former federal lawmakers, Mr Amaechi was former speaker of the Rivers State House of Assembly.

The National Assembly’s Point of Order makes room for Senators returning based on the number of times elected, senators who have been members of House of Reps, Senators elected for the first time but does not recognize State House of Assembly.

But Senate President Lawan described the benefit given to Mr Amaechi as an extension to lawmakers from the state House of Assembly, and a beneficiary by chance.

“We have agreed on a policy on how we go about the screening of nominees, we agreed that any nominee with the legislative background will enjoy the privilege that we normally extend to such nominees.

“I can see this nominee is so clever that he emphasized that he’s been a speaker.”

However, Senator Danjuma Goje, representing Gombe Central read the senate rule and objected to the privilege and noted that the Senate rules do not extend the ‘take a bow’ to state lawmakers.

“I was a victim, when I came to this senate in 2011 as a former member of the House of Assembly and when I insisted that I had the cognate experience, I was told the order does not recognise House of Assembly, I don’t know whether we are changing these rules.”

Senator Lawan agreed that the privilege to state lawmakers is not in the rules, but asked the upper chamber to regulate themselves, even without things in the rule.

“We adopt this because we should extend this privilege to the House of Assembly, there is nothing wrong in that. The present nominee is only a beneficiary by chance.”

There was a brief rowdiness at plenary, but the Senate President explained that they are not doing it for Mr Amaechi, but he is benefitting because the senate said so before he came.

“Any person who passed through a legislative house should be a beneficiary of this policy,” he stated.