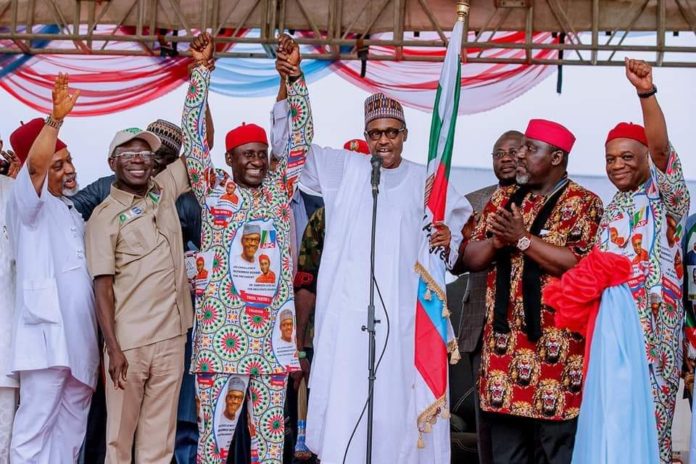 Following the Nomination of Dr Uchechukwu Sampson Ogah by President Muhammadu Buhari as the Ministerial nominee from Abia State ,feelers coming in from the Presidency has revealed that the President rejected the nomination of any candidate from Ngwa bloc of the All Progressive Congress(APC) in Abia State.

Uche Ogah,the 2019 Governorship Candidate of the All Progressive Congress in Abia State was the First Ministerial nominee to be screened by the Senate of the Federal Republic of Nigeria on Wednesday.

During his Screening by the Nigerian Senate,Dr Ogah identified building of critical infrastructure and agriculture as ways out of the current challenges facing the Country.

He said: “We need to improve our critical infrastructure, that’s the only way we can create jobs. “We do not need to also concentrate our industries in the urban areas; we need to create industries in the rural areas. “We cannot put our economy purely on oil. Yes, agreed that oil is a cash cow but we can develop our agriculture. “Nigeria has the capacity to feed the whole world. Nigeria economy is about N43 trillion and the private sector is expected to drive the nation’s economy.” On deregulation, Ogah said the country needed a guided deregulation where everything is not dumped on the economy. He also insisted that the current value of the naira was okay.

However it was gathered that President Muhammadu Buhari nominated Dr Uche Ogah based on his sincerity in making the Abia State Chapter of the All Progressive Congress grow.

It was gathered that the Presidency sources all agreed to the common knowledge that Dr Uche Ogah brought fresh air to the All Progressive Congress which made the Party perform creditably well during the last General Elections.

The National Chairman of the Party Comrade Adams Oshiomhole and other top Leaders of the All Progressive were not happy with the poor performance of the APC in Abia Central and South Senatorial District of Abia State.