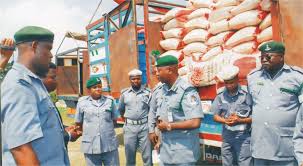 The Nigerian Customs Service (NCS) said it intercepted a truck with registration number XA2297NAK carrying 700 bags of foreign rice on the Minna-Lambata-Suleja highway.

Mr Benjamin Lamba, the Public Relations Officers for the service in Niger Area Command, who disclosed in a statement on Thursday, said that the rice was worth N11.9 million.

Lamba warned smugglers and their accomplices to steer clear the command as its vigilant personnel would not allow arms, rice and cars to be smuggled through its area of supervision.

“It is worrisome that some Nigerians remain unrepentant even as they continue to lose their goods through smuggling business,’’ he said.

He said the command had adopted measures to detect tactics of smugglers but appealed to stakeholders to volunteer information that would help in apprehending those involved in illegal trades.