Today, the former chairman of the Pension Reform Task Team (PRTT), Abdulrasheed Maina is being arraigned alongside his son by the Economic and Financial Crimes Commission (EFCC).

Abdulrasheed Maina alongside his son, Faisal, who is a final year Telecommunications Engineering student in a Dubai University is to face charges.

A source within EFCC says a separate charge has been filed against Faisal Maina who allegedly shot at security operatives while trying to evade arrest, Although the fresh charges against him and his son are yet to be read.

Maina and his son were arrested on September 30, 2019, at an Abuja hotel by the Department of State Services (DSS) and subsequently handed  them over to the EFCC on October 2 for further investigation and prosecution on allegations of fraud and money laundering to the tune of N2.1 billion. 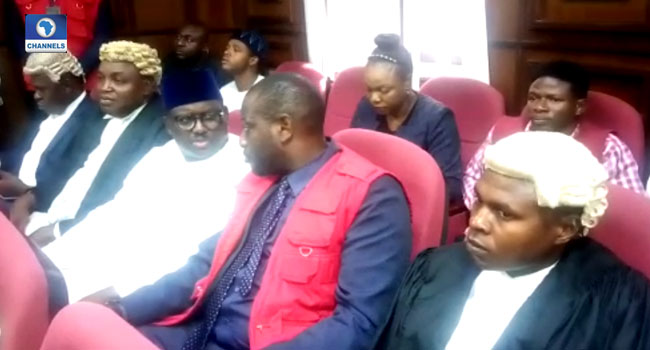 Before he was arrested by the DSS, Maina had previously evaded arrest.

Meanwhile, the Federal High Court, Abuja, had on Tuesday gave an order, authorising the Federal Government to take over 23 properties belonging to Maina.

The EFCC is arraigning him on 12-count charges, bothering on money laundering, operating fictitious bank accounts and fraud.

The Justice Ogunbanjo forfeiture pronouncement was sequel to the exparte motion, filled by the EFCC, seeking Maina’s interim forfeiture of the properties to the Nigerian Government pending the completion of its investigations.

The EFCC application also sought an order of the court to publish a newspaper advertisement on the properties, to enable anyone who has any reason why they should not be forfeited to federal government to indicate with prove of non-forfeiture application.

Buhari Declare State of Emergency in my state, Zamfara – Gov....