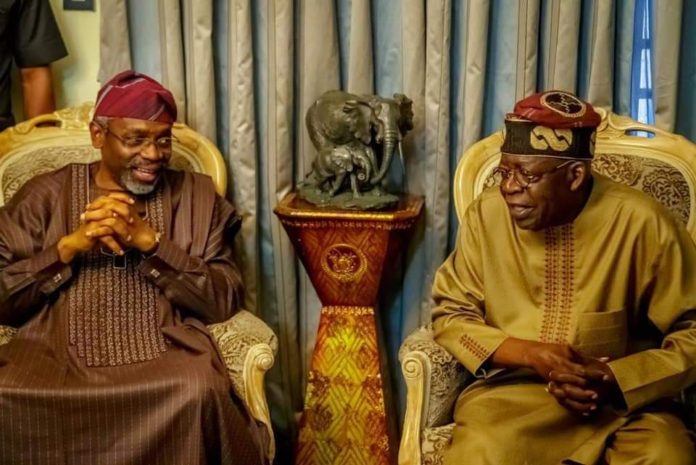 The Speaker of the House of Representatives, Rep. Femi Gbajabiamila has paid glowing tributes to the national leader of the All Progressives Congress (APC), Asiwaju Bola Ahmed Tinubu on his 68th birthday.

Gbajabiamila, who said Tinubu has been serving humanity diligently and tirelessly in the last 68 years on earth, noted that having the former Lagos State governor in the country is a tremendous blessing to the citizens.

In a birthday message he signed, the Speaker said Tinubu’s belief in democratic tenets is unparalleled, and his democratic credentials are unprecedented and unrivaled.

The Speaker added that the history of Nigeria’s current democratic experience will not be complete without the name of Asiwaju, the Jagaban of Borgu.

He said Tinubu has become a phenomenon in Nigeria’s politics, and that his school of politics has produced so many great political icons from 1999 to date.

Tinubu’s contributions in making Nigeria’s democracy stable are everywhere for all to see, the Speaker said.

“The Asiwaju is someone that has become a household name not only in Nigeria, but in the entire African continent.

“Today, our current democracy, which started in 1999, enjoys stability due largely to the contributions of Asiwaju and others of like mind.

“It is on record that after serving as the Executive Governor of Lagos State for eight unbroken years, Tinubu laid the foundation for a modern Lagos State, where Nigerians from all walks of life are accommodated.

“Not only that, Asiwaju began the modern infrastructural development in Lagos State, which all his successors had no problem in sustaining.

“But his political frontiers transcend Lagos State as he has become a force to reckon with virtually everywhere in the country. There is no state where Asiwaju does not have a group of mentees due to his openness, accommodating nature, and political sagacity.

“Nationally, in the days that he was in the opposition, he ensured that he remained focused and later played significant role in the merger that saw the birth of the All Progressives Congress (APC), about six years ago.

“He led the APC as an opposition party to form the government at the centre in 2015 for the first time since 1999. He did this while joining forces with other patriotic Nigerians within the fold of APC.

“I make bold to say that Tinubu’s style of politics will in years to come be a subject of intense research among political scholars. This is because of his uniqueness. There is hardly a politician that gets the kind of loyalty and support that he gets.

“Myself as a product of the Tinubu’s school of politics, I learn every day from the Jagaban, and I have no regrets whatsoever being one of his close political associates over the years. To me, he has been a worthy mentor all these years.

“As he marks his 68th birthday, I pray God Almighty will continue to grant him good health, wisdom, and bless him with more knowledge so that he will continue to do the good works that he has been doing for Nigeria and humanity,” Gbajabiamila said.

Unless We Work Together, We Will Suffer For Nothing, Buhari Tells...