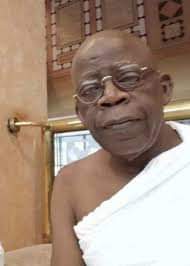 The antecedents of former Lagos State Governor, Asiwaju Bola Tinubu, are clear testimonies that he has a lot to offer the country, Deputy President of the Senate, Senator Ovie Omo-Agege has said.

In a goodwill message personally signed by Senator Omo-Agege to mark Tinubu’s 68th birthday, he commended the former lawmaker and APC National Leader for his service to fatherland.

While applauding the elder statesman for standing vehemently against military regime, Senator Omo-Agege described him as a political icon and architect of modern Lagos.

He pointed out that Tinubu will continue to remain a reference point in Nigerian politics because of his selfless and humane nature.

“Your antecedents are clear attestations to my belief that you still have a lot to render to your fatherland ; a Senator who later set the template for the greatness and viability of Lagos State; a political icon known for standing resolutely for democracy during the military era and leading eminent patriots towards actualising the restoration of democracy.

“Your capacity to work vibrantly with people across all forms of divide has enriched Nigeria’s politics and fostered tremendous unity of purpose such as that which birthed the All Progressives Congress.

“I have no doubt that, for you and all your ardent followers, this birthday will signpost a renewal of hope and the strong resolve to lift our nation higher, even in the face of daunting odds.

“I heartily felicitate with you, the family, friends, associates and innumerable admirers as you clock 68 today. I wish you good health and greater prosperity in the years ahead,” Omo-Agege said.

Yomi Odunuga,
Special Adviser, Media and Publicity, to the Deputy President of the Senate.