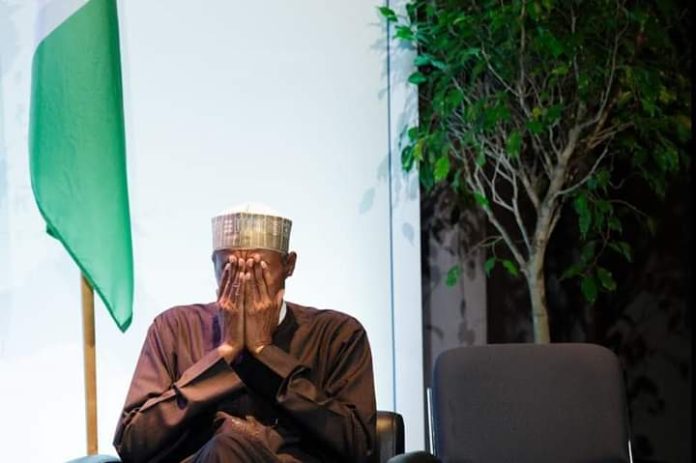 Reno shared the summary via his twitter handle explained why Buhari five years has caused Nigerians sorrow, tears and blood.

* Sorrow, because Nigeria is now the world headquarters for extreme poverty
* Tears, because our currency is almost worthless
* Blood, because life is very cheap in Buhari’s Nigeria

1-Before General @MBuhari was elected in 2015, Nigeria was projected as the third fastest growing economy in the world. 6 months after Buhari was sworn in. Nigeria officially went into a recession. The first in 25 years. Buhari is destroying Nigeria!

2-During the 2015 campaign, General @MBuhari promised to create 3 million jobs per annum. As you read this, the total job losses under Buhari is almost 15 million. Not only did he not create jobs, but he destroyed the jobs others created

If you study the question asked by the @OfficialAPCNg, you will agree with me Buhari is a FAILURE!

5-Why is Nigeria more corrupt under General @MBuhari than under @GEJonathan? Think of:

6-On May 29, 2015, Nigeria’s foreign debt was $7 billion. Today it is $30 billion and General @MBuhari just asked to borrow $5.5 billion more. In just 5 years, Buhari has taken more foreign loans than @OfficialPDPNig took in 16 years combined

7-By 2015, ex President @GEJonathan built over 100 almajiri schools and 9 universities in the North. General @MBuhari has not built even 1 almajiri school, yet he budgeted $500 million loan to digitise NTA. Nigeria has 13 million out of school kids

9-In 2015, General @MBuhari promised to defeat Boko Haram. Today, Boko Haram is stronger. Chad’s President personally led troops to Nigeria to fight Boko Haram. He refused to return seized weapons to Nigeria, saying it would be returned to Boko Haram

10-General @MBuhari promised to secure Nigeria in 2015. Today, Nigeria is more insecure than in 2015, according to the Global Terror Index. Herdsmen now kill Nigerians at will. Government’s response was ‘giving land for ranching is better than death”

12-In 2011, @Gallup rated Nigeria, under @GEJonathan, ‘The happiest place on Earth’. Today, Nigeria is facing a suicide crisis. Yet, General @MBuhari claims he has ‘saved Nigeria from collapse’.

13-In my book, Facts Versus Fiction: The True Story of the @GEJonathan Years, I listed multiple projects INITIATED, STARTED, and COMPLETED by Jonathan.

Can anyone name just 3 verifiable projects INITIATED, STARTED, and COMPLETED by General @MBuhari?

“I am the most abused and insulted president in the world but when I leave office, you will all remember me for the total ‘freedom’ you enjoyed under my government.”

Today, is there freedom of speech in Nigeria?

16- Professor Wole Soyinka insulted former President @GEJonathan and his wife multiple times, yet the President never exchanged insults with him. Today, the Buhari regime has rubbished the same Soyinka they used to rise to power.

17- On December 12, 2015, General @MBuhari’s regime killed 347 Shiites in Zaria including children and infants. Till date, NOTHING has been done to punish the perpetrators. Rather, the man who masterminded it, COAS Buratai, was PROMOTED to Lt General!

19- As President, @GEJonathan funded and patronised Aso Rock Clinic. Under General @MBuhari, the clinic has so deteriorated, that, according to @AishaMBuhari, it does not have syringe or paracetamol. Yet, Buhari said he saved Nigeria from ‘collapse’!

20-Under 16 years of @OfficialPDPNig, Nigeria enjoyed good relations with the US to the extent we obtained Category 1 certification by @TSA. Under General @MBuhari, Nigeria was put on a US travel ban due to government’s ineffective anti terror fight

21-So, after listing these 20 verifiable failures of the General @MBuhari maladministration, how can anyone in his right mind agree with the Presidency that Buhari saved Nigeria from collapse? The truth is that Nigeria is collapsing BECAUSE of Buhari