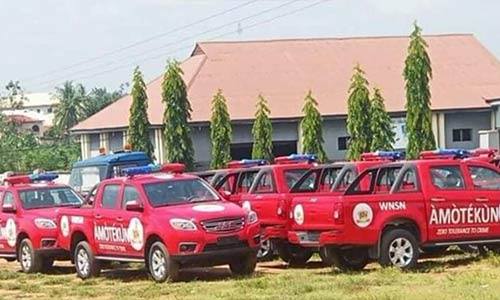 Spread the post
The Muslim Rights Concern (MURIC), An Islamic human rights organization, has insisted that there is a connection between the Amotekun initiative and recent agitation for the establishment of Oduduwa Republic.

MURIC, therefore, declared that Muslims in the region will never be part of the proposed Oduduwa Republic.

MURIC called on the governors in the region to be wary of the activities of irredentist elements who are exploiting the euphoria of the moment to achieve their selfish and parochial objectives.

The group also warned that breaking away from the rest of Nigeria cannot be in the best interest of the Yoruba.

This was contained in a press statement issued to newsmen by Professor Ishaq Akintola the Director of MURIC, on Monday.

It reads, “While we are pleased to observe that it seems the authorities have taken note of our agitation to balance the appointment into amotekun by recruiting into all caders from all religious groups, our suggestion of a change of name from ‘amotekun’ to ‘Oduduwa Guards’ is yet to come to reality.

“That notwithstanding, the most pressing issue now is the call for the carving out of a Yoruba Republic out of present-day Nigeria. Moves being made include the circulation of a fraudulent survey in Yorubaland asking people to reply ‘Yes’ or ‘No’ to the establishment of a Yoruba Republic. Anybody can guess what the result of such a survey coming from an unverified source can be.

“Another document which is also being circulated lists the capital of the proposed republic as Ibadan. However, those behind the idea exposed themselves as dreamers when, apart from the six Yoruba states of Lagos, Ogun, Oyo, Ekiti, Osun and Ondo, they claimed that the geographical area of Oduduwa Republic includes Edo, Kogi, Kwara and Delta. However, Ijaw youths have predictably denounced the Utopia.

“It is becoming glaring day by day that the amotekun initiative is leading to the formation of a Yoruba nation. The same group that agitated for the establishment of Amotekun security outfit is the same that is now clamouring for a sovereign Yoruba nation. It is no longer a smokescreen, or a ‘bojuboju’ game. The masquerade has uncovered its face.

“Among the dangerous steps taken by the Yoruba separatist group is the quit notice they gave to Hausa-Fulani residents in the region.

“Another cause for concern is the appointment of military retirees as heads of the amotekun security outfits in Yoruba states instead of using retired senior police officers. This portrays a militant body language.

“It is noteworthy that Chief Alao Akala, a former governor of Oyo State has condemned the appointment of retired military men as heads of amotekun in five of the six states and predicted that the initiative would fail.

“The fact that the appointment of retired senior military men also coincided with the beginning of agitations for an Oduduwa Republic speaks volumes. Besides, the agitation has already been taken to the United Nations.

“It is however heartwarming that some conscious Yoruba groups have staged protests against the amotekun security outfit.

“Equally disturbing is the fact that the proponents of amotekun and Oduduwa Republic are most eager to employ both fair and foul means to achieve their target. This Machiavellian disposition reveals the group’s desperation to unleash anarchy. Their threat to assassinate the director of MURIC exposes them as a group that will not stomach opposition.

“Other foul methods adopted by the group include trailing and surveillance of the residences of those who oppose amotekun, use of fake and nonexistent Islamic organisations to demarket our organization, cyber war, ‘killing’ MURIC’s press statements and sponsorship of columnists to disparage the organisation and its director.

“But we remain undaunted. Our resolve to uphold justice, fairplay and peaceful coexistence within a united and strong Nigeria is as solid as the Rock of Gibralta. The tough must get going when the going gets rough. For us it is ‘No surrender, no retreat’. A group that goes all out to do all the above cannot be trusted to lead the Yoruba people to El-Dorado.

“MURIC hereby declares that the silence of Muslims in the Yoruba states must not be mistaken for approval of secessionist moves. Yoruba Muslims have no confidence in the irredentists particularly because the latter have never been given fair treatment whether in political appointments, employment in the job market or in matters of Allah-given fundamental human rights. It is public knowledge that it is in Yoruba schools that Yoruba Muslim children are intimidated, harassed and humiliated over their civil rights particularly the hijab question.

“So what is the guarantee that Muslims will not face worse discriminatory treatrment, oppression and persecution in an Oduduwa Republic? It is on record that a prominent Yoruba politician, Femi Fani-Kayode threatened publicly that they know where to keep people like the director of MURIC ‘when Oduduwa … is ready’. Oduduwa Republic is therefore going to be a slaughter slab and a deadly trap for Yoruba Muslims.

“For the umpteenth time, we wish to clarify our position regarding the Yoruba security outfit, amotekun. MURIC is not opposed to a security initiative which will complement police efforts in curbing criminality in the South West. What we oppose is a system targeting Muslims and people of other tribes who reside in the region or marginalising Muslims in recruitments into its units.”

“We also frown at all criminal propensities, including the activities of herdsmen who destroy farmlands though we are aware that this is not limited to Yorubaland alone. We strongly condemn non-indigenes in Yorubaland and other places who make crime their preoccupation and cause disaffection between the Yoruba and law-abiding people of their tribes. In this regard, we call for stiff penalties for the suspected killers of Mrs. Funke Olakunrin, daughter of Chief Reuben Fasoranti, the Afenifere leader who are currently facing trial once they are found guilty.

“We appeal to those behind the formation of an Oduduwa Republic to let Nigeria be. We are stronger in a union. There is also no guaranty that the proposed republic will last if it ever becomes a fait accompli. Yoruba Muslims will be the leading voice of opposition to the unholy union in post-secession. Next, the various tribal groups, principalities and communities will suddenly wake up from their slumber and revive the old bitter rivalries. Will the Egba submit to the Ijebu? Will the Modakekes kowtow to the Ife? What of the Ijesha? Will they stand akimbo while Iwo and Ede go away with all the milk and honey from the phantom republic? It will be a den of jealous, rancourous and disunited neighbours.

“We call on Yoruba governors to be wary of the activities of irredentist elements who are exploiting the euphoria of the moment to achieve their selfish and parochial objectives. We have no reason to assume that the governors are part of the grand scheme. Our assumption is that all the governors are interested in is to secure the people of the region and their properties. MURIC is fully in support of this kind of security arrangement.”