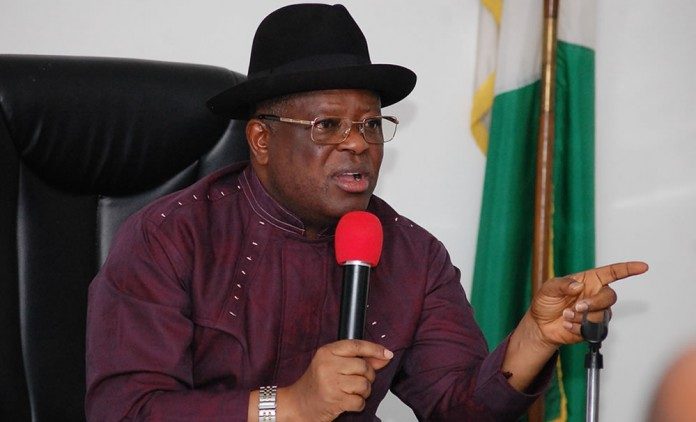 The governor of Ebonyi State Chief David Umahi has warned Amaka communities in Ivo local government area of the state to jettison any action that would result in a communal clash.

The governor was reacting to the alleged killings of two men in Amata Ishiagu community by suspected youths in Lokpanta, Abia state.

He further warned the affected Amaka community to jettison any action that would push them into reprisal attacks.

Recall that the alleged killing of the two men was the result of a lingering boundary dispute that ensued between the two neighbouring states of Abia and Ebonyi.

DAILY POST gathered that the boundary dispute resulted in the destruction of valuable properties that worth millions of naira and the loss of lives.

Umahi made this known while addressing the people of Amata Ishiagu community during his official visit to the warring communities of Ebonyi and Abia States.

He urged them to shun any provocation or attempt to take laws into their hands by contemplating reprisals.

It was gathered that the renewed boundary killings started when one Pius Chika Onyedika an indigene of Amata Ishiagu went to the farm to cultivate when youths from Lokpanta invaded the farm and shot him in the head.

Another indigene of the community whose name was yet to be identified at the time of filing this report was equally shot by the same Lokpanta youth’s while working at his farm.

The governor who was represented by his Deputy, Barr. Eric Kelechi Igwe said the state government was working hard to ensure that the boundary was demarcated.

According to him: “We are here to sympathize with you on the attack of two of your sons. All we want you to do is to remain peaceful and avoid any form of retaliation. Our government will not allow anything that belongs to you to be taken away from you and given to another person. We are working to ensure that the boundary is demarcated”, he said.

Earlier in a remark, the Ivo Divisional Police Officer, SP Dan Nwonu who briefed the governor on the level of the incident, said he had to call for reinforcement to enable him control the fresh crisis.

“On the receipt of the information, I mobilized to the scene and took the two people that were shot to General Hospital, Ishiagu for medical attention. After that, I called for reinforcement from the police headquarters where they dispatched a SARS patrol team and a federal patrol team to come and assist me”, he said.

On his part, the Caretaker Committee Chairman of Ivo local government, Onyebuchi Ogbadu said, apart from the shooting of the two persons, the two warring communities held one person each from the communities hostage during the melee but they have been released.

Ogbadu said “on 30th of May, Amata people went to plant rice and this is rice farming season. They were accosted by youths of Lokpanta who were with dangerous weapons. The Lokpanta youths shot two of our Amata people, they are still in the hospital. Amata people went to recover two of their people that were shot and captured one person from Lokpanta.

“Lokpanta people also captured one of our people by name, Ifeanyi Ogbonna. Amata and Lokpanta people are brothers, it is just the creation of states that separated them. This crisis is an age-long crisis which is also in court.

“Our Representative in the state House of Assembly has been doing his best to resolve the crisis, he has been meeting with the National Boundary Commission in Abuja for demarcation of the boundary.

So, this is an age-long land dispute and it usually resurfaces during the farming season like this” he stated.