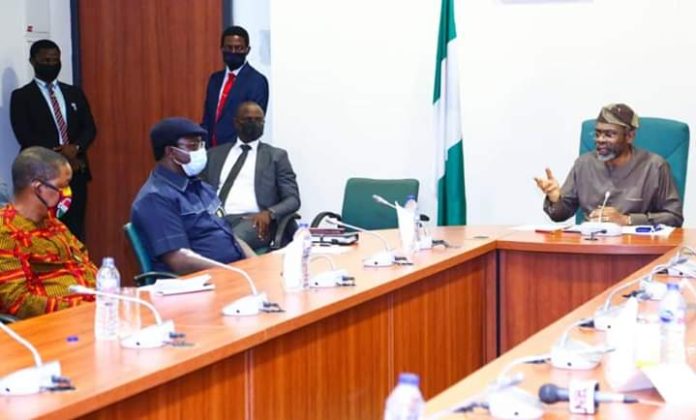 The House of Representatives will continue to engage the Nigeria Labour Congress (NLC) to better the lives of the Nigerian workers so that they could always put in their best, Speaker Femi Gbajabiamila has said.

The Speaker, who commended Nigerian workers for their sacrifices over the years, said the 9th House would not hesitate to promote good ideals that would strengthen their working environment.

Gbajabiamila said he was deeply concerned by the issue of strikes that come up from time to time, which he said would not augur well for the country’s economy.

Speaking at a meeting with the national leadership of NLC led by its president, Mr Ayuba Waba, the Speaker also encouraged Nigerian workers to support the government and do what is right at all times.

He said since the inauguration of the 9th House on June 11 last year, the leadership of the House has intervened in several looming strikes in the health, education and power sector, but he urged the workers to always exercise some high level of patience.

“We’ll continue to strive towards a convenient environment for workers to avoid strikes. So, the House is there. Ours is a people’s House, and we’ll continue to work for the people.

“We’ll also encourage workers to do what’s right. For example, the issue of IPPIS shouldn’t have come up. When such issues come up, we won’t hesitate to be objective enough,” he said.

“In the 9th House, we adopted the mantra of Nation-Building: A Joint Task. This isn’t about any party, men or women, Islam or Christianity. But it’s about Nigeria and Nigerians. So, we’ll work with you. When it comes to national issues, we should all keep our affiliations aside.”

Gbajabiamila said the House considers the issue of casualisation of workers raised by the NLC president a very serious matter, and that the House would also ensure the amendment of the labour law to accommodate certain concerns.

“The issue of workers’ right to belong to unions can’t be contested. The constitution guarantees such. On the social dialogue, we’re open to it. Try and bring the amendment. When you bring it, we’ll look at it thoroughly,” the Speaker added.

On the issue of climate change also raised by Waba, Gbajabiamila said: “We believe in it. I’m glad you believe in it. Whatever we need to do, we must do it to avert something that affects everybody all over the world. It’s an essential threat.

“You discussed the economy, that’s probably the most important thing in the front burner. We’re already looking at post COVID- 19.

“This government should be and must be given credit that they’re walking the talk in terms of diversifying the economy, particularly in agriculture.”

On the concern raised in the area of power, the Speaker said the country must vigorously pursue solutions, noting that the House has for a while concluded work on a bill to criminalise estimated billing and has been forwarded to the Senate for concurrence.

Gbajabiamila also said that the solutions to the challenges faced in the oil and gas industry are the passage of the Petroleum Industry Governance Bill (PIGB) and the fixing of Nigeria’s refineries.

To address the concern expressed by Waba on ensuring transparency in spending COVID-19 funds, Gbajabiamila said the House had already constituted a panel headed by Rep. Haruna Mshelia.

He also said Nigeria needs to have a credible database to be able to take certain decisions and make good plans.

He expressed the support of the House for the President of the African Development Bank (AfDB), Dr Akinwumi Adesina, in the face of ongoing adversaries against him, saying a resolution was passed on Tuesday in that regard.

Earlier, Waba said they were at the Speaker’s Office as part of NLC’s efforts to continue with their engagements with the National Assembly.

He said it has been part of their tradition to meet with leaders of the National Assembly from time to time, noting that: “It’s heartwarming that under your leadership the House has passed some pro-people legislation. I particularly remember the anti-casaulisation bill and the issue of the minimum wage.

“‎I want to assure you that labour will be partner in progress with the House as it has been from time immemorial. We will continue to commend the synergy between the National Assembly and the Executive on the current fight against COVID-19. It is also worthy of commendation that the House had to suspend its break to attend to the national emergency of COVID-19,” he said.

While commending the Speaker for intervening in the planned strike actions by some bodies of the union, Waba said such leadership of purpose was what was needed.

He raised issues such as casualisation of workers, amendment of the labour law, rights of workers to belong to different unions, climate change, diversification of the economy, challenges in the oil and gas sector, credible data for the country, spending the COVID-19 fund, the politics in AfDB, among others, all of which the Speaker addressed.

The War Against Corruption Has Been Discredited – Odinkalu