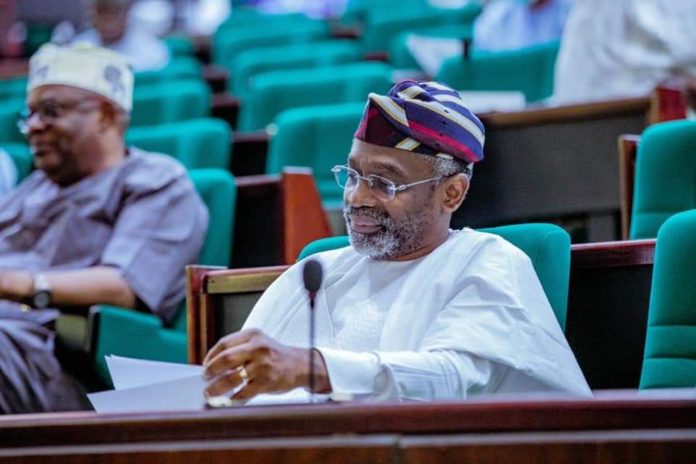 If the news of the Speaker of the House of Representatives, Rt. Hon Femi Gbajabiamila, on Wednesday 3rd June 2020, denying ever writing any letter for an extension of the tenure of the Clerk of the National Assembly, Sani Ataba Omolori and other Staff is anything to go by, then one wonders why till date the Clerk still retains his office when he is supposed to have been retired since February, 2020, according to the National Assembly Service Commission rules.

The seeming conspiratorial silence of the leadership and members of the 9th Assembly should worry any right thinking Nigerian, especially when it is an institution that inspires hope in our democracy.
According to a highly placed source in the National assembly, It has become worrisome the twist in the face-off between the Minister for Niger Delta Affairs, Senator Godswill Akpabio, and some members of the National Assembly as the Deputy Senate President, Senator Ovie Omo-Agege mandated the Clerk to write a petition to the Economic and Financial Crimes and Commission, EFCC, against Akpabio, bothering on alleged malfeasance and money laundering. In what looks like a desperate launch of a vendetta against Akpabio, the petition refers to a $4.9bn Niger Delta Development Commission (NDDC) contract award to Osmoserve for supply of relief materials for the Covid-19 pandemic across the nine Niger Delta States. This is most likely because the Minister chose to courageously take the right course of action by backing the Interim Management Committee (IMC) of NDDC to plug all loop holes from which scarce funds were surging out of the Commission over the years.

There are strong indications also that the duo of Deputy Senate President, Ovie Omo-Agege and Sen. Nwaoboshi, the Chairman, Senate Committee on NDDC, both from Delta State are in active connivance with the Clerk of the National Assembly to ensure they frustrate the work of the Forensic Auditors currently perusing meticulously through the accounts of the NDDC.

Nothing else explains coherently the reason the EFCC currently working with other renown financial institutions in auditing the books of NDDC will welcome an isolated case bothering on same concerns as the ongoing Forensic Audit.

It all reeks of vindictive intent on the part of the Deputy Senate President, Ovie Omo-Agege, who, very obviously, is still disenchanted by the way the Bernard Okumagba-led Board ended in a still birth. Omo-Agege had nominated his former contemporary, Bernard Okumagba with whom he served as Commissioners under Ex Governor James Ibori’s Government in Delta State. Unknown to many, Peter Nwaoboshi and the duo of Omo-Agege and Okumagba all served at the same time in that Government, from where they got the appellation, “the Ibori Boys.”

The decision of President Buhari to jettison the already screened members of the Board has not gone down well with Omo-Agege and co, who believe that Akpabio opted for an IMC in a bid to upstage the nominees and their sponsors.

The President’s action is considered an advise from the Minister and that has pitched some members of the National Assembly against Akpabio and by extension, the Interim Management Committee saddled with the responsibility of running the affairs of the Commission during the period of the Forensic Audit.

It is sad to realize that the Clerk of the National Assembly, Sani Ataba Omolori’s desperation to keep his job for another 5years, albeit illegally can make him resort to anything, including joining an unholy union with Principal Officers of the Senate and House of Representatives, simply to retain his job. It won’t be out of place, therefore, if I refer to these strange bedfellows as friends with benefit.

That the Deputy Senate President in a letter addressed to the Chairman of EFCC with a reference no. NASS/CS/99/R/21/19, the Clerk of the Senate stated that he was directed by the office of the Deputy Senate President to request the assistance of the EFCC “in an ongoing inquiry into the affairs of the core members of the Interim Management Committee of the NDDC…” According to the letter titled, “SENATE REQUESTS THE INVESTIGATION AND MONITORING OF MINISTER OF NIGER DELTA AFFAIRS HON. GODSWILL AKPABIO AND POSSIBLE CRIMINAL AFFILIATE MR. SCOTT IKOTT TOMMEY”, the Senators are overriding the adhoc-committee already inaugurated to look into the alleged misappropriation of N40 billion by the Minister and the IMC. This also implies that the Senate President may have mandated his Deputy to petition the EFCC or it could be that his powers have been whittled down by his Deputy and his ally, Nwaoboshi.

Shamefully, it has become a story of one day, one propaganda while another day comes with yet another blackmail, petitions, lies and deceit as the case maybe against the Minister for Niger Delta Affairs and the IMC of NDDC.

Most shocking is how a notable figure like the Deputy Senate President, Ovie Omo-agege can go all out to scuttle a Forensic Audit authorized by the President on the request of the Niger Delta Governors.

How is it that Senator Peter Nwaoboshi is throwing every available spanner into the works, like a drowning man holding unto a straw, ready to pull anyone along with him? How can Sen Peter Nwaoboshi be so knowledgeable about the NDDC, yet, this level of sleaze is being perpetuated under his watch? Is he saying he is unaware of the 50 billion naira payment to NGOs in a single day, on May 15, 2019, and another payment of billions of Naira to 360 NGOs in 2018, and another singular payment of 15 billion Naira to a company based in Akwa Ibom, without any commensurate work done?

It is becoming more difficult convincing Nigerians that government is for them, when news like the clandestine move by NASS leadership to extend the tenure of the Clerk of the National Assembly greeted the news media. For a personality like Sani Ataba Omolori who has served the nation meritoriously, the honour is in retiring from active service with pride, rather than be forcefully evicted going by allegations of illegal extension of his service, a position held by the National Assembly Service Commission.

Following the sudden sequence of allegations against the Minister and the IMC, you will not be living in doubt that they are all geared towards stalling the Forensic Audit, so as continuing with business as usual in the NDDC; nothing more.

A keen observer of the face-off between the NDDC and NASS will tell you that should this impasse in the region be resolved in objectivity, the Niger Delta people will be the greatest beneficiary, and they will have a better NDDC than they ever before the crisis started.

To some gladiators, it is an ego battle, to some others it is a battle for the soul of the Commission to meet the yearnings and aspirations of the people of the Niger Delta region. Whether you lend your voice to the developing debate or not, one thing is sacrosanct; it is the expectation of all well-meaning Niger Deltans that President Buhari will stop at nothing until the final report of the Forensic Audit is presented and is implemented to the letter.