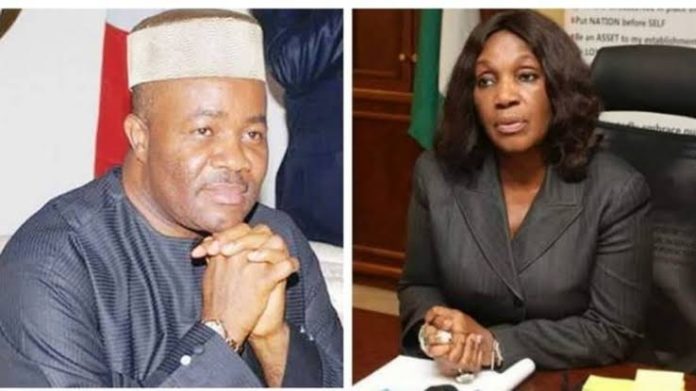 The Rivers State High Court has stopped the arrest of Dr Joi Nunieh, the immediate past Managing Director of the Niger Delta Development Commission (NDDC).

Justice Elsie Thompson gave the order on Friday in Port Harcourt following an application filed by the former NDDC boss against the Minister of Niger Delta Affairs, Senator Godswill Akpabio, and four others.

Others listed as respondents include the Commissioner of Police in Rivers, the State Security Service (SSS), the Inspector General of Police, and the Nigeria Police Force.

In the suit marked PHC/1128/2020, Nunieh’s counsel, Slyvester Adaka, had sought an ex-parte order of the court restraining the arrest of the applicant pending the determination of the suit.

After hearing the submissions of the applicant’s counsel and no appearance for the respondents, Justice Thompson ordered the respondents from IGP, police, and the DSS from “arresting, detaining and harassing” Nunieh.

He also stopped the minister and police commissioner in Rivers from using any of the third to fifth respondents to arrest, detain, harass, and intimidate“ the former NDDC boss pending the determination of the Notice on Motion.

The judge ordered that the DSS, IGP, and Nigerian police should without delay unconditionally withdraw security operatives from Nunieh’s home.

He, therefore, granted leave for the applicant to serve Senator Akpabio through the head office of the NDDC located along the Aba Road in Port Harcourt.

Justice Thompson also ordered that the IGP and Nigeria Police be served through the office DSS in the state capital.

He further adjourned the case until July 27 for hearing on the substantive matter.

Nunieh approached the court days after armed men besieged her home in Port Harcourt in an attempt to arrest her.

The attempted arrest was, however, thwarted by the Rivers State Governor, Nyesom Wike, who arrived at the scene to move the former NDDC boss to the Government House.

Although the reason for the arrest has yet to be ascertained, it appeared to be a fallout of the controversy triggered by the corruption scandal in the NDDC.

Nunieh had also accused Akpabio of corruption and sexually harassing her among several other allegations, but the minister has denied them all.

In a statement on Friday, Akpabio questioned why the former NDDC boss waited until the government launched investigations into the activities of the agency before speaking up.