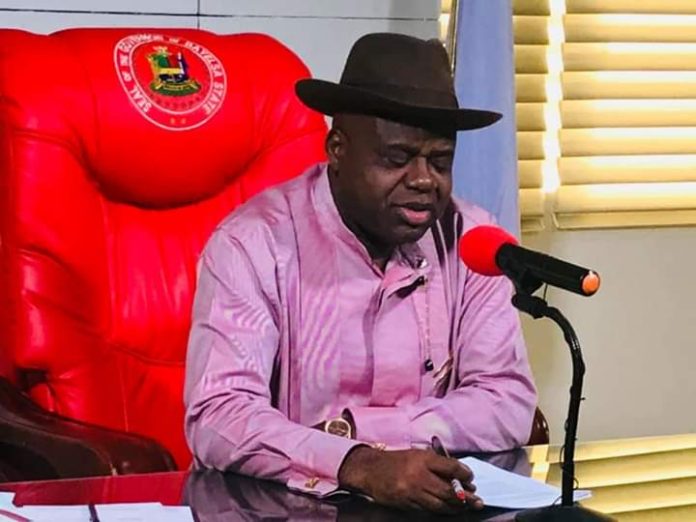 On Monday the Bayelsa state Governor, Senator Douye Diri, has described as ” half-hearted” and “insulting” the congratulatory message extended to him by Chief Ndutimi Alaibe, the Former Managing Director of the Niger Delta Development Commission (NDDC) following last Tuesday’s Supreme Court’s dismissal of his appeal.

Expressing dissatisfaction with the action of Chief Alaibe, an aspirant in the September 3, 2019 Peoples Democratic Party (PDP) governorship primary that he won, Senator Diri said the former Managing Director of the Niger Delta Development Commission (NDDC) went too far in his bid to unseat him.

Gov. Douye Diri, who made his position known during a meeting with the State Working Committee of the PDP, who paid him a solidarity visit at the Government House, Yenagoa, described Alaibe’s statement issued by his Personal Assistant, Enize Ogio, as insulting and totally unacceptable.

Senator Diri who rejected the message also noted that in line with the Supreme Court judgement, nobody is bigger than the party, including himself.

Gov Diri wondered why an internal process like the primary election, which was transparent and guided by the party’s constitution, was dragged to court.

His words: “It was an internal party affair, which ordinarily should not have gone beyond the shores of our state.

“We had a very transparent process, which was acknowledged across the country. From the nomination of delegates down to the primaries, everything was done according to the constitution of our party.

“If they accept our olive branch, they should issue a new statement to let the PDP and the government of Bayelsa know that they are still members of our party.”

Diri congratulated his party for being the vehicle for his emergence as governor.

His words “When God is involved, nobody can contend with Him because He is the only one that gives power. At the end of the legal battles, PDP was vindicated.

“We thank God and those who stood by us. We thank the National Chairman and the National Working Committee, who stood firmly by the party and our government and defended our mandate from the High Court, the Appeal Court down to the Supreme Court.

“Like we keep saying, the doors are still open even though they have desecrated our party. What was shocking to me was that even after I extended the olive branch of inviting them after that judgement to return, they still brought out one insulting, unconstitutional and illegal statement in the name of a congratulatory message”.