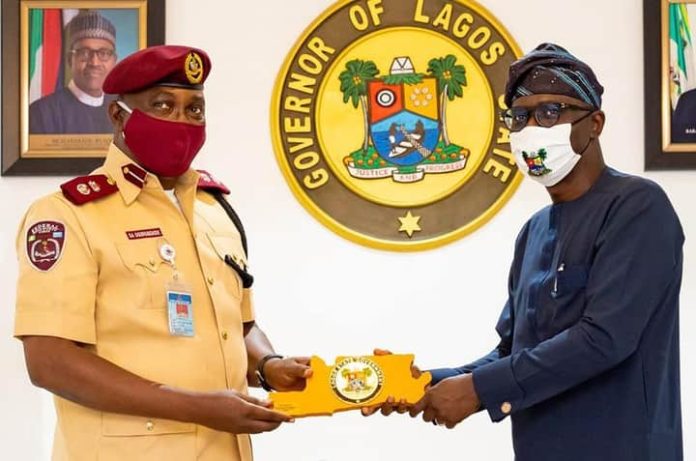 Lagos State Governor, Mr. Babajide Sanwo-Olu, has appealed to residents of the State to exercise patience and bear the discomfort that will be experienced from the six-month partial closure of the Third Mainland Bridge, which starts Friday (tomorrow) evening.

The Governor said the closure of the 11.8km bridge – the busiest in the State – was inevitable, following physical deterioration observed on the structure after an integrity test conducted by the Federal Government.

The closure of the bridge, Sanwo-Olu said, will bring about pain, but the Governor said the development was necessary to prevent disaster that may result from the total collapse of the infrastructure.

He promised that men of the Lagos State Traffic Management Authority (LASTMA) would constantly be on the road with their Federal counterparts to ensure seamless movement of vehicles during the period.

Sanwo-Olu spoke on Thursday while receiving the new Sector Commander of the Federal Road Safety Corps (FRSC) in Lagos, Commodore Olusegun Ogungbemide, in a courtesy visit at the State House in Marina.

The FRSC chief was accompanied on the visit to the Governor by the Lagos Commandant of the Nigeria Security and Civil Defence Corps (NSCDC), Mr. Adeyinka Ayinla.

Sanwo-Olu said the State Government had carried out improvement work on alternative routes mapped out for diversions, while observing that vehicular movements on the Third Mainland Bridge would be disrupted by 25 per cent of its regular traffic.

He said: “The partial closure of Third Mainland Bridge is not something that everybody should worry about, because this is an exercise that had been done before. For emphasis, the traffic disruption is only about 25 per cent of the regular traffic on the bridge. The 75 per cent of vehicles that normally ply the route will still have access to move on the bridge during the period of repair.

“We have furnished and improved the design of the alternative routes, and we are still working on other arterial routes so that our people can have seamless journey times to and from their places of work. So, there is nothing commuters should worry about in this period. We will ensure the repair work on Third Mainland Bridge does not overburden them. We will be deploying over 650 LASTMA officers on the road to control the traffic.”

To further assuage the discomfort that may be experienced by commuters and ease the roads of gridlock, Sanwo-Olu said the State had strengthened the State-owned Lagos Ferry Service (LAGFERRY) by doubling its capacity for mass movement, thereby giving the residents an alternative through water transportation.

He said: “We are also urging the commuters to explore the option of waterways in their journey. The jetty built in Ilaje area of Bariga has been activated and we are deploying more speedboats to raise the capacity of our ferry service. This is to ensure that many people are not on road at the same time.”

The Governor said his administration remained committed to improving transportation in the State, noting that delivering efficiently run intermodal transportation system was an important component of his Government’s deliverables.

Sanwo-Olu welcomed the FRSC Sector Commander to Lagos, assuring him of the State Government’s readiness to work with the federal safety agency.

Responding, Ogungbemide said the FRSC played prominent roles in the smooth running of Lagos security architecture, pleading with the Governor to integrate the agency into the State’s Security Council.

The FRSC boss assured Lagos residents of his readiness to engage activities that would give road users pleasant experience. He said 250 FRSC operatives would be deployed to work with LASTMA to maintain traffic on Third Mainland Bridge and alternative routes.

The complete repair work on the bridge is expected to take two years, out of which the carriageway will be closed to vehicles for six months.