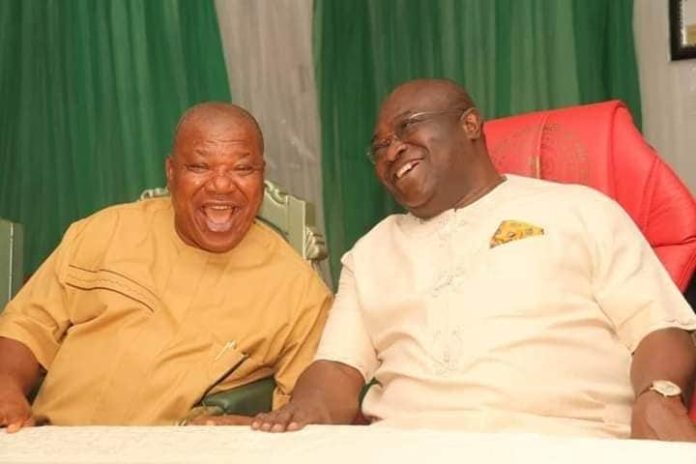 The Governor of Abia State, Okezie Ikpeazu, PhD has received with deep shock and profound sadness, the news of the death of Chief Sir Johnson Onuigbo, the State Chairman of the Peoples Democratic Party (PDP).

The Governor who described the Late Chief as a “close personal friend and long standing political associate” is deeply saddened by his death describing it as a major setback in the political development of the State.

The Governor recalls with sad nostalgia, the hardwork and passion shown by Late Chief Onuigbo in the administration of the ruling party in the State. In particular, the Governor recalls the efforts of the Late Chief in the 2019 elections that ensured his electoral victory and those of a majority of the members of the party. It will be correct to say that he was one of the major architects of our electoral victory in 2019.

“Chief Onuigbo had a peculiar pattern of administration which was a direct consequence of the warm personal relationships he built over the years with a cross section of the Abia populace and which ultimately rubbed off on how he ran the party producing solid victories and stability within the party”.

“Beyond politics”, the Governor continued, “Akinboard was a close personal friend of mine for many years and this relationship was one of the major reasons for the seamless and cordial relations between my administration and the party”.

He further described him as a man of principle and integrity who insisted that internal democracy must be institutionalized in the party.

“In all areas where he was privileged to serve our people, from the Chairmanship of Umuahia North LGA to the Abia Central Zonal Chairmanship and as State Chairman of our party, Chief Onuigbo exhibited uncommon passion and dedication”.

“My family and I, join the teeming members of our party and indeed the entire state to mourn the passage of this great man and iconic politician, and to pray the good Lord to grant his wife, family and the people of Ibeku Kingdom the fortitude to bear this very painful loss”.

“Abia State has lost one of her most outstanding and most committed political leaders. Akinboard will be sorely missed”, the Governor concludes.

Insecurity: For Peace In North East, ‘I’m Ready To Give Out...