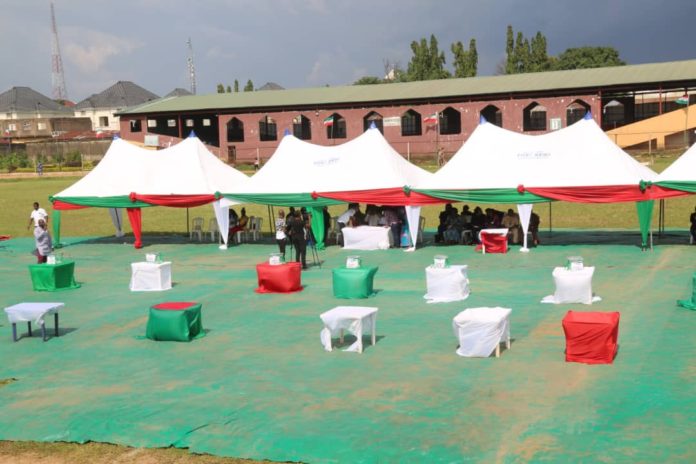 On Thursday the Peoples Democratic Party, PDP, Akwa Ibom State chapter had its state congress where new executive members were elected to pilot the affairs of the party in the next four years.

The 39 state executives were elected by 3,845 accredited delegates across the 31 local government areas of Akwa Ibom state.

The Congress, which was conducted at the Nest of Champions Uyo, the state capital, was supervised by the chairman of the Congress Committee, Hon. Eric Acho Nwakanma and the officials of the Independent National Electoral Commission (INEC) led by A.B, Pata.

The Chairman, Hon. Nwakanma, who adjudged the congress as peaceful, announced Hon. Udo Ekpenyong as the chairman-elect while Hon. Lawrence Udosen as the deputy

Nwakama lauded the cooperation and level of organisation in the party in the area and tasked elected officers to give maximum cooperation to the leaders of the party and the new chairman in the State.

In his valedictory speech, the outgoing chairman of the party in the State, Mr. Paul Ekpo recounted how he used persuasions to create harmony and peaceful coexistence among members.

He said, “Years after, I can look back with pride and proclaim, indeed ‘There was a Party’. We used persuasion to create harmony and peaceful co-existence within, while we wielded the rod against those who sought to divide us through the employment of selfish schemes

“Our burden in the management of the party was how to be both friendly and firm. Friendly to invite and keep people but firm to instill discipline.”

In his acceptance speech shortly after the exercise, the newly-elected chairman, Hon. Ekpenyong, attributed his election to God and promised to be focused and determined to consolidate on the gains made and take the party to greater heights.

He commended the outgoing SEC for laying a good foundation for the new SEC and promised political inclusion and consultation while giving the party a human face even as he solicited for loyalty from party members.

Also the leader of the party, Governor Udom Emmanuel at the occasion said the party was challenged to do more for the growth of the state despite its numerous achievements and commended the efforts of the outgoing SEC in repositioning the party and enthroning peace in the affairs of the party.

The Governor urged the new chairman to maintain the the democratic tradition of the party and remain close to God and be faithful to the ideals of the party.

US Warns Against Attemp to Tamper with Results in Ebonyi,Enugu,Abia,others