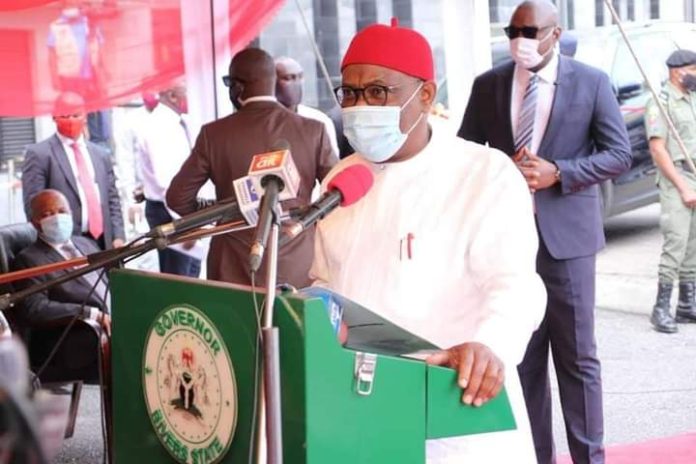 According to him, this has manifested through comments, special affiliations, body language and palpable commitments.

Governor Wike was speaking at the handing over of 41 Sport Utility Vehicles to Judges in the State Judiciary as well as seven Judges of the State origin serving in the Federal Judicial Service.

“Adjudication and politics are incompatible extremes hence, no judge can be both and legitimately claim to be an independent and impartial adjudicator.

“Heads of the country’s judicial system should positively address the identifiable weaknesses and processes that have continued to create room for judicial corruption.

“The transformation agenda in the state judiciary under my administration is based on the fact that we believe that judges and magistrates who toil on a daily basis to dispense justice and advance societal peace need to be taken care of.

“Therefore, the rule of law, independence of the judiciary and effective delivery of justice are on the top priority of my administration.

“Even though my administration inherited a judiciary that was completely neglected and judicial officers were treated with disdain, we made a commitment to change the unfortunate narrative”, he said.

The governor noted that only a dishonest character would deny the pragmatic and purposeful attention his administration brought to all facets of the state judicial system in the last five years.

He announced the completion of 20 purpose-built luxury and fully furnished Judges Quarters built in fulfilment of his administration’s policy of providing decent life- long accommodation for all Judges in the State.

Governor Wike also said that government would relocate judges who are currently living at highly commercialised environments to befitting secured and serene locations.

He stated that there should be no room for corruption and indulgence among judges taking into cognizance the level of incentives provided for them.

The governor urged the judges to reciprocate government’s gesture by maintaining the highest sense of responsibility, integrity and productivity in discharging their duties.

In her remarks, the State Chief Judge, Justice Adanma Iyaye – Lamikanra noted that Governor Wike has made the state judiciary the envy of other judiciaries in the country in terms of infrastructure and technology.

Justice Lamikanra expressed the gratitude of the State Judiciary to the governor for the gesture that would enhance the welfare of judges.

Also speaking, the State Attorney and Commissioner for Justice, Prof. Zaccheus Adangor said the presentation of the official vehicles to the judges was a demonstration of the implementation of one of the core values of the NEW Rivers Vision.