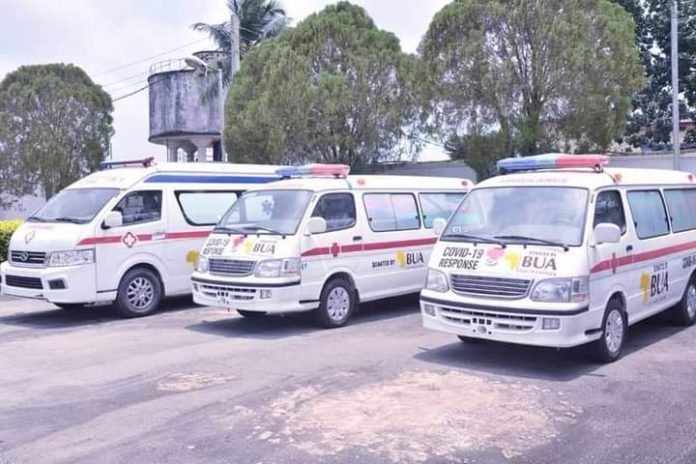 The BUA Group has presented three ambulances to the Abia State Government as part of its support for the fight against Covid-19 disease.

Receiving the vehicles in Government House Umuahia, Governor Okezie Ikpeazu thanked the BUA Group for her timely intervention in the battle against the coronavirus pandemic. He noted that the BUA Group has shown empathy, love and care for the average Nigerian since the outbreak of Covid-19 disease and assured that the vehicles would be put to good use in reaching the hinterlands.

The Governor disclosed that Abia State has started community testing in all the Local Government Areas in the State with a view to covering at least 30% of the population. He informed that two more labouratory centres would soon be set up in Federal Medical Centre, Umuahia and Michael Okpara University of Agriculture, adding that the idea is to have at least six molecular labouratories in the State in the near future. He promised that the State Government would continue to synergize with the BUA Group to bring the best to Abia State.

Presenting the vehicles earlier, the
representative of the Chairman of BUA Group, Alhaji Muhammed Ibrahim said as part of corporate responsibilities of the group, it decided to partner Federal government and States to support the fight against Covid-19.

He commended Governor Okezie Ikpeazu for his giant strides in infrastructural development in the State and congratulated the Governor for successfully overcoming the attack of Covid.

Earlier Mr. Kelechi Onuiri who facilitated the donation told the Governor that the BUA Group is happy to associate with his administration in the fight against Covid-19 and even beyond.

Deputy Governor Sir Ude Oko Chukwu, Secretary to Government, Barrister Chris Ezem, Honorable Commissioner for Health, Dr Osuji and some other members of the State Executive Council were present at the event.