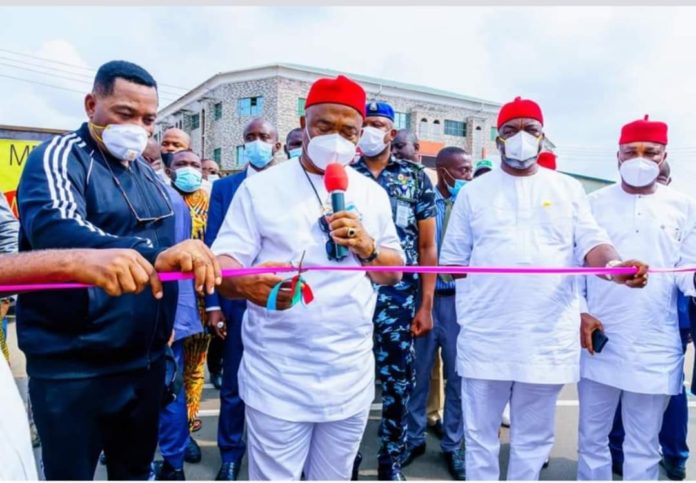 Imo State Governor, Senator Hope Uzodimma, on Monday, 14 August 2020 embarked on the commissioning of some roads completed by his administration within seven months of its existence, while inspecting ongoing ones.

The governor described the roads as critical to the economy of the state and expressed happiness that they were completed within seven months of his administration.

Speaking on the reason his government decided to embark on comprehensive renovation of internal roads and flood control in Aladimma Housing Estate, he said it was because the area was historic in the annals of the state.

“These roads are very important to the economy of Imo State and indeed the economy of Nigeria. This road is an integral part of the programme that will stimulate our economy, post Covid.

“Aladimma used to be very historic and the historical importance of Aladimma Housing Estate, made it necessary for us to restore the urban status of this area. You will agree with me that this contractor has done a very neat and quality job worthy of commendation”.

Fielding questions from newsmen, former Nigerian Minister for Labour and Productivity, Mr Chukwuemeka Nwogu who was among the high powered dignitaries who accompanied the governor on the commissioning and inspection of projects said the governor has started on a good footing by completing and commissioning some critical projects within the first seven months of his administration.

He pointed out that projects completed and commissioned and the ongoing ones they inspected were real projects that are on ground, not fictitious or imaginary ones that exists only in billboards.

He said the governor has shown so early in his administration that he has all it takes to step into the shoes of late Sam Mbakwe who did so much for the old Imo, adding that Governor Uzodimma was working in tandem with the principle and manifesto of APC and President Muhammadu Buhari which is all about working selflessly for the people and fighting corruption.

While calling on Imo people to continue in their support for the government, he promised that in no distant time, rural roads and other critical projects across the nooks and crannies of the state will receive the touch of the government’s 3Rs agenda of Reconstruction, Rehabilitation and Recovery.

We Are Building Infrastructure To Improve Economic Activities Says Wike