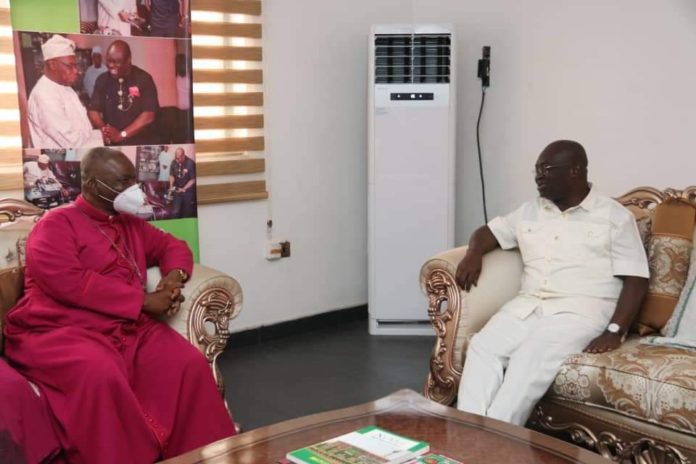 Governor Okezie Ikpeazu has restated his absolute faith in God as the sole reason for his survival from the attack of Covid-19.

The Governor stated this today when he received a delegation of Bishops of the Anglican Province of Aba at Government House Umuahia.

He thanked the Church of God, especially the Anglican Church for their fervent prayers and intercession during those trying moments. According to the Governor, the only reason he is alive today is because God heard the prayers of our people on his behalf and reaffirmed his commitment to continue to discharge his obligations as Governor to the very best of his abilities, fully aware of his commitment to God. 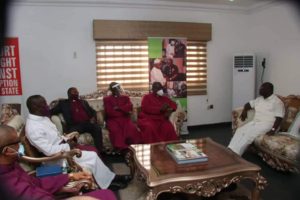 He thanked the leaders of the Anglican Church for the visit and assured them that will continue to identify with the church of God. He cslled on the Bishops to send the message to their members to be very conscious of the deadly effects of Covid-19 and take adequate precautions by following the laid down protocols by the health authorities.

Speaking earlier, leader of the delegation and Archbishop of the Aba Ecclesiastical Province of the Anglican Church of Nigeria, The Most Rev Dr Isaac Nwaobia told the Governor that the Bishops came to join him in expressing their gratitude and those of the entire Anglican Church in the province, to God for hearing the prayers of the people of the State in saving the life of the Governor and saving the State from the anguish of losing a sitting Governor.

He also thanked the Governor for the palliative food items donated to churches in the State during the lockdown period.

The Bishops later prayed for the Governor and the entire state.

The Aba Ecclesiastical Province of the Anglican Church of Nigeria covers the entire Abia State and is made of 9 Dioceses namely Aba, Aba Ngwa North, Ukwa, Umuahia, Ikwuano, Arochukwu/Ohafia and Isuikwuato/Umunneochi.

PIB is a fraud, even bandits control 90% of gold deposits...