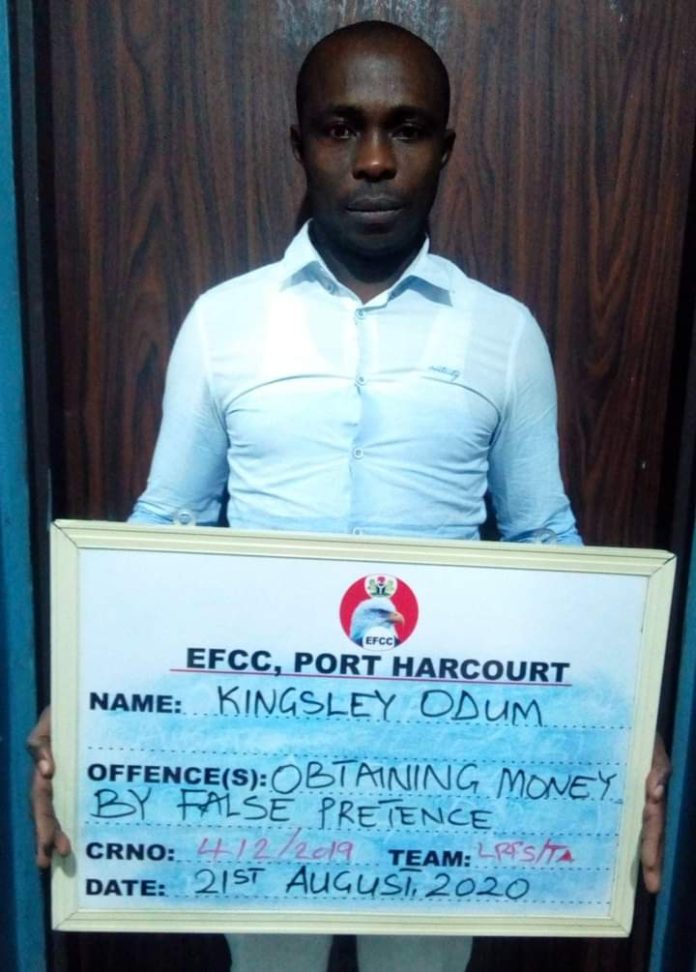 The Port Harcourt zonal office of the Economic and Financial Crimes Commission (EFCC), has arraigned one Kingsley Odum before Justice I. M. Sani of the Federal High Court, Port Harcourt, Rivers State for land fraud.

He was docked on one-count charge of obtaining money by false pretence to the tune of N17,550,000.00 (Seventeen Million, Five Hundred and Fifty Thousand Naira).

The charge read: “That you Kingsley Odum on or about December, 2016 at Port Harcourt, Rivers State within the jurisdiction of this honourable court, by way of false pretence and with the intent to defraud did obtain the sum of N17,550,000.00 (Seventeen Million, Five Hundred and Fifty Thousand Naira) through the named account of Kingsley Odum with account number 1017521391, domiciled in United Bank for Africa from one Mrs. Njideka Edith Ikeobi-Nwafor in Port Harcourt, purporting the said sum to be full payment of a parcel of land, situated at Rumuchiolu Town in Rivers State, knowing same to be false and thereby committed an offence contrary to Section1(1) (a) of the Advance Fee Fraud and other Related Offences Act 2006 and punishable under section 1(3) of the same Act.”

The defendant pleaded “not guilty” to the charge, upon which prosecuting counsel, N. A. Dodo asked the court for a commencement date of trial and for the defendant to be remanded in prison custody. However, counsel to the defendant, E.C Obasy reminded the court of a pending bail application of the defendant which was not opposed by the prosecution.

Justice Sani granted the defendant bail in the sum of N5 million with one surety in like sum. The surety must show proof of ownership of a landed property in Port Harcourt and deposit two of his recent passport photographs with the court. He remanded him in the prosecution’s custody, pending the perfection of his bail terms and adjourned the matter till September 2, 2020 for trial.

Trouble started for Odum when a petitioner alleged that the defendant, sometime in 2016, sold a parcel of land to her, situated at Rumuchiolu in Eneka Town, Obi/Akpor Local Government Area of Rivers State, for which she paid a total sum of N18,060,000.000( Eighteen Million Sixty Thousand Naira),
She only discovered that the land does not belong to the defendant when she sent workers to commence development on the land.

All efforts she made to retrieve her money proved futile.