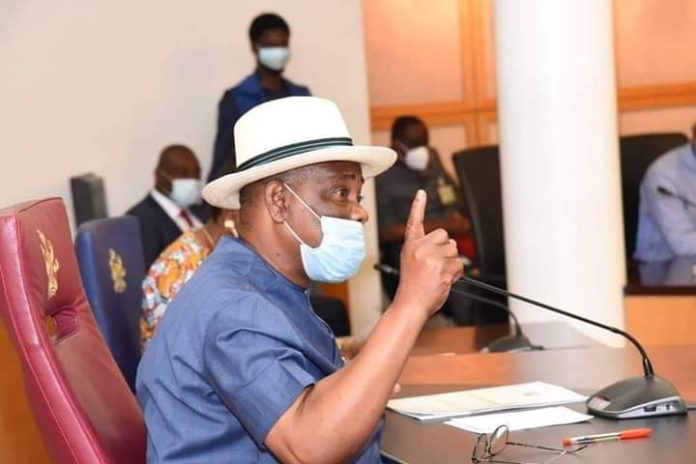 *Demands IOCs to relocate their headquarters to Rivers

He has therefore dismissed multinational companies who use insecurity to justify their refusal to relocate their operational headquarters to the Region.

Governor Wike made the assertion during a courtesy visit by the Minister of State for Petroleum Resources, Chief Timipri Slyva and the management of the Nigerian National Petroleum Corporation (NNPC) at Government House, Port Harcourt.

The Governor wondered why insecurity does not prevent the drilling of oil but could be used to deprive the State what is due to it.

“They use insecurity issues to place us in a disadvantaged position and deny us our right.

“There is insecurity in Lagos, Kaduna and Katsina States. Yet, companies do not run away from those States. The railway projects are not stalled too.

“The multinationals are sometimes to blame because they instigate insecurity by paying militants and turn around to blame it on the people.

“There is no excuse to operate outside our State. The Federal Government should compel them to relocate their headquarters to the State as the hub of the hydrocarbon industry.

The Governor noted that the NNPC has not done anything substantial for the State after many years of operation.

“The Port Harcourt Refinery has continued to operate below installed capacity. Even the access road has been in a poor state for years.

“I urge you as minister and members of the board of directors to dualise the three kilometres Road and change the narrative,” he stated.

Governor Wike noted the patriotism Chief Slyva has demonstrated by attracting federal projects to his State and urged other Ministers to emulate him.

He said even if the Minister is of the opposition Party in Bayelsa State, his sense of patriotism has made him to place the interest of the State above partisan interests.

Earlier, the Minister of State for Petroleum Resources, Chief Timipri Slyva, had told the Governor that plans have reached an advanced stage to rehabilitate the existing refineries in the country.

He said the Federal Government decided to start the rehabilitation programme from the two refineries in Port Harcourt because Rivers State is the headquarters of the hydrocarbon industry.

The Minister announced that a third refinery would be built to bring the number of refineries in the State to three.

Chief Sylva commended Governor Wike for being persistent in his quest to get the Refinery Road dualized and promised that the Ministry would support the move.