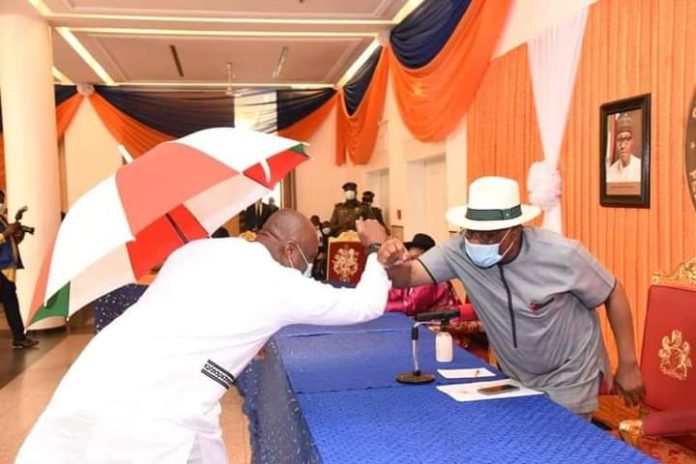 He has therefore, declared that his success in politics and governance is because he carries no grudge against anybody.

Governor Wike was speaking when the people of Akpabu and Itu communities, led by their traditional and political leaders, paid him a courtesy visit at Government House, Port Harcourt.

Governor Wike said during his second term inauguration, he asked for forgiveness from those he offended and also promised to forgive those that hurt him.

Today, he said, Dr. Chidi Lloyd has publicly expressed regret of his role in the 2013 crisis at the State House of Assembly and apologised.

Governor Wike stated that he has forgiven Dr. Lloyd because he is a Christian and those who became victims of that act have also consented.

“Forgiveness is key for every christian. God has forgiven me, why can’t I forgive. We have also met with Hon. Michael Chinda and others, we got their approval for reconciliation.

“I love to attract people to our party because I am not a greedy politician. I believe that the more the merrier. I will do what is in the best interest of the people and the party.

“Politics of progress does not undermine the importance of friendship. I believe that we must forget yesterday, put ourselves together for a better tomorrow,” he said.

The Governor also assured that he would complete the Akpabu-Itu Road and the electrification of the communities.

“When we go to Akpabu during electioneering campaigns, you cannot move from there to Omudioga community even though they are in the same ward due to bad road network. I have promised to reconstruct the road and restore electricity.

” We will complete those projects within the life span of this tenure. Politics is about dividends of democracy,” he stated.

Former chieftain of the All Progressives Congress(APC) Dr. Chidi Lloyd expressed regret of his role in the crisis at the State House of Assembly on the 9th of July 2013 and apologised to the people of the State and Hon. Michael Chinda.

Dr. Lloyd said he has learnt how to be benevolent in politics among other things from Governor Wike.

He declared that henceforth, he and members of his community would work for the Peoples Democratic Party(PDP).

Rivers State Chairman of PDP, Ambassador Desmond Akawor who received Dr. Chidi Lloyd into the Party noted that he is an asset.

He thanked Governor Wike for being an excellent statesman who has made it easy for the party to retain its foothold in Akpabo and Itu communities.

The paramount ruler of Akpabu and Itu communities, Eze Godwin Chukwuemeka Ordu thanked Governor Wike for the projects and pledged that with their son, Dr. Lloyd, they would ensure the success of PDP in the communities.

Elder Paul Wonodi noted with pleasure the benevolence, and forgiving nature of the Governor which has been demonstrated in reconciling with Dr. Chidi Lloyd.

He said the Party would benefit from the versatility of Dr. Lloyd and assured that they would work to secure more success for the party.

According to him, because the Governor is a man who loves peace, he has continued to achieve greater heights.