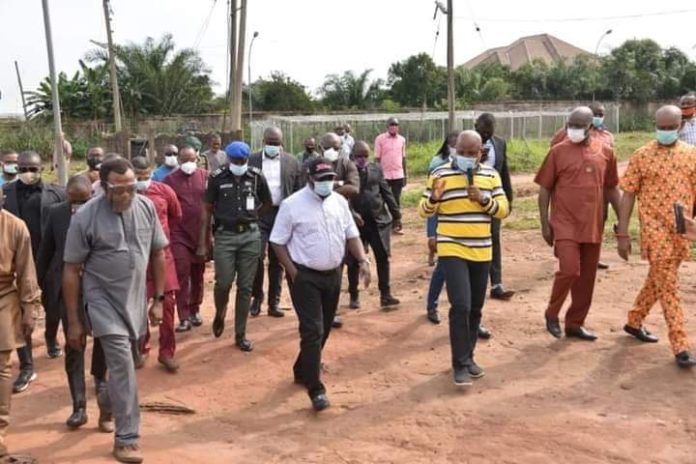 Abia State Governor, Dr Okezie Ikpeazu has expressed optimism that pipe borne water will begin to run in Umuahia urban city by the end of September this year.

The Governor stated this while inspecting new equipment procured by the state government for this purpose at the State Ministry of Public Utilities and Water Resources in readiness for the pumping of water in the urban and semi-urban cities of the State.

He assured of his administration’s support to the ministry of public utilities in realizing government’s dream of providing potable water to the people of the State.

The Governor called on engineers of the ministry to engage in capacity building that will ensure the new equipment are properly maintained directed his Chief of Staff, Dr. Anthony Agbazuere, to station men of the Nigeria Security and Civil Defence Corps (NSCDC) in the premises of the ministry to protect the new installations.

Dr. Ikpeazu said he was also passionate about giving the rural populace clean water and urged the Commissioner for Public Utilities to intervene in that regard. He also charged the Commissioner to maintain the relationship with the funding agencies and assured that his government will continue to meet its counterpart funding obligations to continue to enjoy the expertise of the agencies.

Earlier, while displaying the equipment to the Governor, the Commissioner for Public Utilities and Water Resources, Engr. Emma Nwabuko, stated that the State Government with the collaboration of United States Agency for International Development (USAID) and World Bank are set to pump pipe borne water into the streets of Umuahia by the end of September.

The Commissioner noted the completion of four industrial wells which aid in pumping of water with a pump house, treatment plant, the installation of a 500KVA power generating set and two solar energy banks for 24 hours regular water supply.

He also disclosed that some buildings including commercial buildings and pump house amongst others have been rehabilitated.

Engr Nwabuko further said that the ministry will soon commence the pumping of raw water as a first step so as to identify leakages among the water pipes and work on them.

The Commissioner commended the Governor of Abia State, Dr Okezie Ikpeazu, for his tremendous support to the ministry promising that they will not let him down.

Also speaking, the General Manager of Abia State Water Board, Engineer Ogbonna Chiemela, noted the importance of getting it right from the onset, stating that the ministry has done a lot to prepare for the project so as to ensure its sustainability.

Five Convicted Fraudsters in Abeokuta to Return $4,641 to Victims