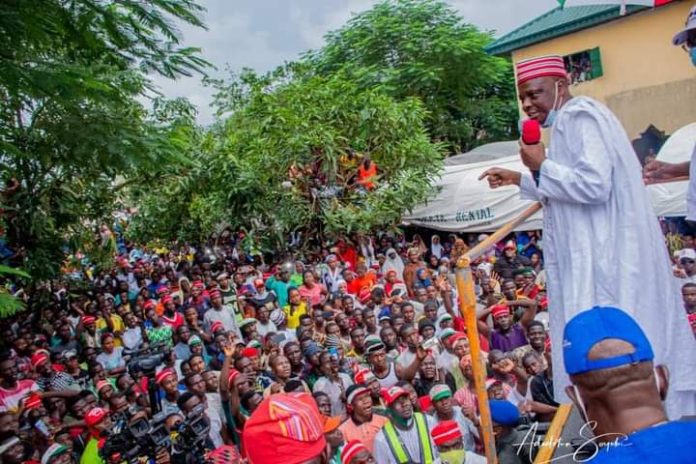 Former Governor of Kano State, Alhaji Rabiu Kwankwaso, has hailed the candidate of the Peoples Democratic Party (PDP), Governor Godwin Obaseki, for his people-oriented projects and programmes across the state, urging Edo voters to reelect the governor who has shown competency in delivering the dividends of democracy in the first term.

Kwankwaso made the call after a meeting with the Deputy Governor of Edo State, Rt. Hon. Comr. Philip Shaibu and leaders and members of the Arewa Community in the state.

According to the former governor, “I am here in Edo State to visit my brother Obaseki and have a word with him and his deputy. I have gone round the city to talk to people myself, on the road and market places, on the need to vote for Obaseki.

“I met with the Arewa Community and they have given us their assurances of support for the PDP on the back of the administration’s developmental strides in the state. My presence here is very important, that is why I am here to support my brother.

“I am here to campaign for my brother and call on the people to vote for competency. I know the trick of the opposition as they are using religion and rigging. That is what is left for them. The people of Edo State are wiser as I am sure that no matter their strategy, it will not have any electoral impact.

“I am so happy that Obaseki has done well as I have gone through his projects in the last three years and nine months. What should matter to us now as a people is who can do the job and do it better.”

“The message is clear; vote for a governor that has already performed, a man that is tested and trusted,” he added.

On his part, Shaibu noted: “This meeting is unique because it cuts across all the wards in Edo State and the leadership of the Arewa Community, including their traditional heads.

“You can tell from the outcome of this meeting that they will all return to their various communities, passing the message to the electorate as we are confident that it will translate to votes, come September 19, 2020.”