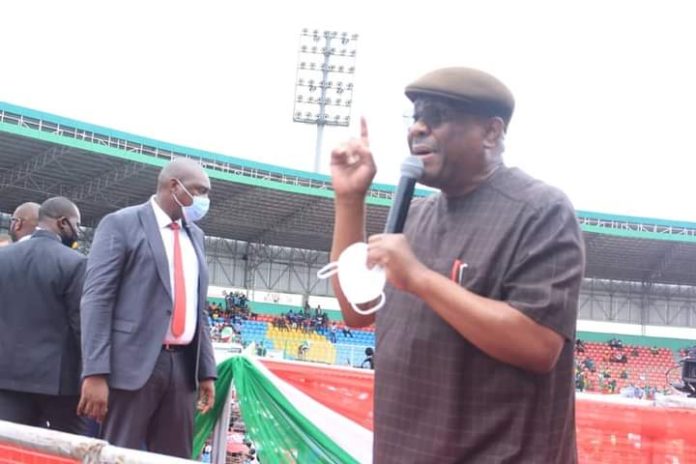 : Says the end of Godfatherism in Nigeria would start from Edo State

Rivers State Governor Nyesom Ezenwo Wike has called on the people of Edo State to come out in their numbers, to ensure the forthcoming Governorship election is free and fair by defending their votes.

The Governor who said this at the Official Peoples Democratic Party (PDP) Nigeria final mega rally for the September 19th Edo State Governorship election informed the people that the campaigns have been concluded and it is obvious majority of people were already in support of Governor Godwin Obaseki. He said even with the clear majority lead the people must not rest on their oars but be vigilant till the final results are announced by INEC.

He said, “by the grace of God the election has been won by Godwin Obaseki.”
“Don’t say because you have won you would go and sleep, we are waiting for INEC to formally announce Godwin Obaseki as Governor of Edo state.”

He explained that inspite of the usual assurances of a free and fair election given by INEC and the Police the people still had a role to play.

“The only way INEC would announce the results is if all of us are vigilant.”
“All the women, all the men all the boys, all the girls wear your jeans and follow the votes bumper to bumper until the election result is announced.”

“The end of godfatherism in Nigerian politics would start from Edo State.” He said.

The rally had in attendance Governor Aminu Tambuwal of Sokoto State, Governors of the South South States, National Chairman of the PDP, Prince Uche Secondus, the Adamawa State Governor, Ahmadu Umaru Fintiri, his Abia State counterpart, Okezie Ikpeazu, the Oyo State Governor, Seyi Makinde, members of the National Assembly and other PDP dignitaries from across the Country.