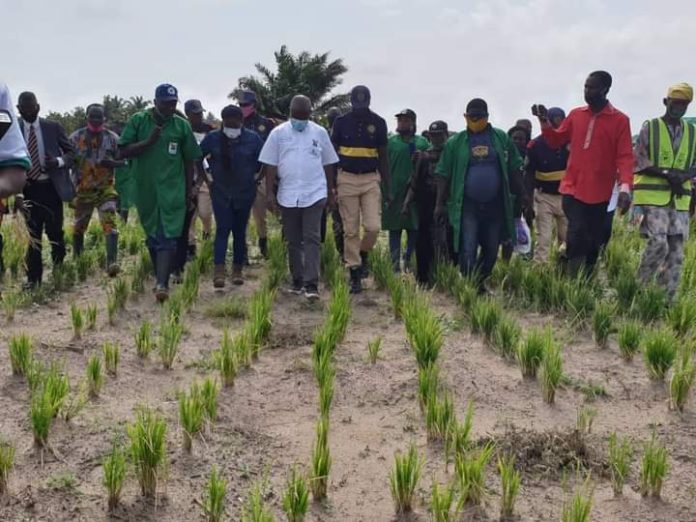 Lagos State Government has charged farmers in the State, especially beneficiaries of Lagos State Agro-Processing, Productivity Enhancement and Livelihood Improvement Support (APPEALS) Project, to improve their productivity for food security in the State and Nigeria in general.

Speaking during a monitoring exercise to APPEALS project sites in Badagry, the State Acting Commissioner of Agriculture, Ms. Abisola Olusanya, said that the APPEALS project sponsored by the Lagos State Government, in conjunction with the Federal Government and World Bank is aimed at supporting farmers’ productivity and access to markets.

Olusanya also disclosed that the Imota Rice Mill project of Lagos State Government, which would be the largest in Africa, would commence operation in December, hence, the need to inspect some of the beneficiaries of Lagos APPEALS, especially those in the rice farming business and are expected to contribute largely to the operation of the Imota Rice Mill when it starts functioning.

She noted that the present administration is very supportive of agriculture, through the APPEALS project, in order to empower women, youths and other residents in the identified three value chains of the project, which are aquaculture, rice and poultry.

While expressing her enthusiasm for youth participation in agriculture, the Acting Commissioner applauded the 12 young graduates from different institutions across the country who formed a cluster group at Sej Farm in Torikoh, Badagry to invest in the aquaculture business with massive support and empowerment by Lagos APPEALS Project.

Also speaking during the visit, the State Project Coordinator of APPEALS, Mrs. Oluranti Sagoe-Oviebo disclosed that 800 farmers recently attended a sensitisation training on rice farming and how their inputs as essential stakeholders will be important to the Imota Rice Mill when it fully commences operations.

She revealed that the rice farms in Gayingbo and Gberefu have benefitted immensely from the APPEALS Project, through grants for mechanised farming as well as distribution of rice seeds, auto-rice sprayer, transplanting machine, fertilisers, applicators, tractors and trenchers to over 200 farmers operating on different farms of about 400 hectares.

Commenting on the visit to Sej Farms Ventures and Afowo Cage Culture in Badagry, both nurturing thousands of different species of fish, Mrs. Sagoe-Oviebo explained that the beneficiaries are mostly youths with existing fish farms and were strategically selected in order to benefit from the project for additional value to fish products.

In his contribution, the National Deputy President of Rice Farmers Association of Nigeria, Mr. Segun Atho, who is the Coordinator of rice farmers in Gberefu, promised that the rice farms in the area would contribute about 60 percent to the operations and sustainability of the Imota Rice Mill at inception.

Also speaking, the Head of Rice Clusters in Gayingbo, Mr. Samuel Obitunde disclosed that over 50 farmers, who are mostly youths, are currently working on 100 hectares of land in the area, noting that APPEALS Project had supported them with over 600 bags of fertilisers, five tonnes of Ofada rice seeds that germinate within three days, three trenchers, auto-rice sprayers, two transplanting machines and fertiliser applicator.

The monitoring team also included the Permanent Secretary, Ministry of Agriculture, Dr. Olayiwola Onasanya; Lagos State Project Coordinator of APPEALS, Mrs. Oluranti Sagoe-Oviebo and other top officials from the Federal and State governments as well as the Private Sector.

Rivers Is being Set Up For Violence Says Ankio Briggs