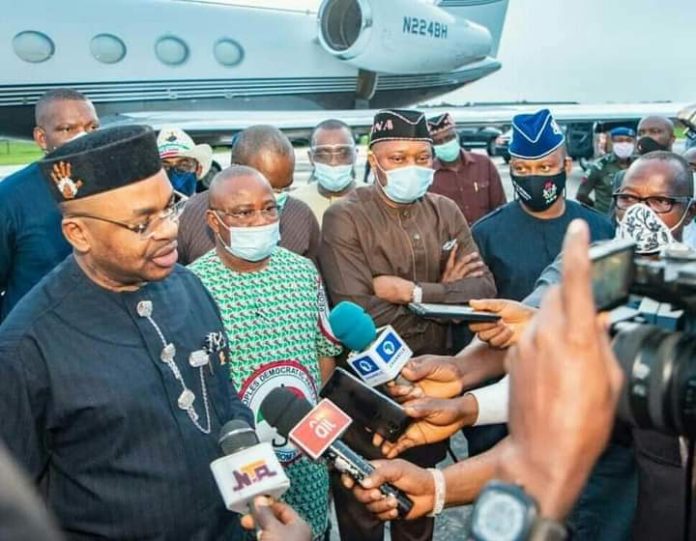 He said that the victory will make room for greater collaborations for the unity and rapid development of the region.

Governor Emmanuel beared his mind during his interaction with Government House Correspondents at the Victor Attah International Airport, on his return from official engagement outside the state.

He congratulated Governor Godwin Obaseki on his reelection as the Governor of Edo State and commended his guts to face the stiff challenge, maintaining that it was important to give glory to God Almighty for the outcome of the election.

The Governor who emphasised that Only God can claim supremacy over the affairs of men, particularly expressed appreciation to the people of Edo State for their resilience in defending their mandate and lauded the country’s election umpire; Independent National Electoral Commission, INEC, and security agencies for ensuring transparency and fairness in the exercise.

“I want to use this opportunity to congratulate my brother, Governor Obaseki. What he did is what it takes to be a man. If you’re a man and you don’t face challenges, you’re not yet there.

Governor Emmanuel observed that the outcome of the Edo state governorship election has brought the six South-south states under PDP and described the election as a positive development that will not onky strengthen the bond of unity in the zone but allow for seamless collaborations through the existing regional commission for the development of the region.

“this is the overall victory for PDP and the South-South. Let’s fly the same colour in the South-South so that when we are talking we talk in spirit and sense of brotherhood.

“It will help the region, it will help our collaboration, it will also help our “BRACED Commission” comprising Bayelsa, Rivers, Akwa Ibom, Cross River, Edo and Delta States, so that we can actually move forward”, he remarked.

EFCC Docks Corps Member, One Other Over Alleged Love Scam