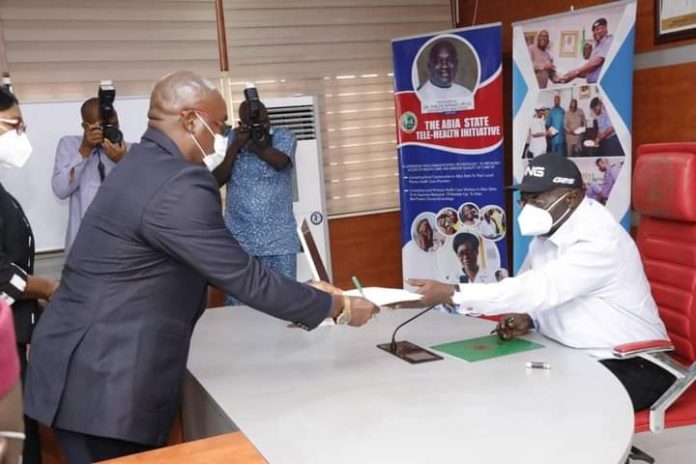 Governor Okezie Ikpeazu has sworn in two new Commissioners, and a new TC Chairman for Umunneochi LGA with a charge for them to see their positions as one that calls for duty and service to God and Ndi Abia.

During the ceremony which took place at the Government House, Umuahia, Governor Okezie Ikpeaxu urged the newly inaugurated officials to comport themselves well and carry out their responsibilities in a manner that will take Abia to the next level of development. He however noted that Abia was yet to have a clear transportation policy given that the transportation sector is a strong enabler that drives trade and commerce, describing the situation as disheartening.

The Governor therefore directed the new Commissioner for Transport, Mr Godswil Nwanoruo, to ensure sanity in the transport sector by immediately closing all illegal motor parks in Aba and Umuahia.

While expressing worry on the operation of commercial tricyclists in the state, the Governor directed the Commissioner for Transport to designate roads where tricyclists can operate as they have continued to constitute nuisance on major roads across the state despite several attempts to make them comply with traffic rules. He equally described as unacceptable a situation where broken down vehicles are allowed to remain on the road for more than two days before they are eventually towed away thereby causing avoidable traffic jam, saying that the practice must stop immediately!

Governor Ikpeazu also urged the transport ministry to deploy modem technology to manage traffic on Abia roads and ensure Abians get to their destinations at all times without hitches.

On the part of the new Commissioner for Environment, Mr Anthony Nwamuo, Governor Ikpeazu mandated him to consolidate on existing template and work towards the full realization of all NEWMAP Projects including reconstruction of Ngwa, Obohia, Ohanku, all adjoining roads along Ndiegoro axis among others, pointing out that the State Government has paid its counterpart funding as well as fulfilled all conditions to The World Bank for the projects. He urged him to lead the ministry of environment to look into the issue of perennial flooding in parts of Abia as the state has been identified as one of those that may likely come under the scourge of flooding and asked them to embark on massive desilting of drainages. The Governor also requested the ministry to consider and work towards the introduction of erosion control strategies in Abia school corriculum.

Governor Ikpeazu who congratulated the new appointees on their new positions, charged the TC Chairman of Umunneochi LGA, Dr Eze Chikamnayo, to look inwards and identify with those things capable of growing the economy of the local government as well as ensure maximum security by carrying stakeholders and youths of the area along.

Responding on behalf of the newly inaugurated appointees, the Commissioner for Transport, Mr Godswill Nwanoruo and the TC Chairman of Umunneochi LGA, Dr Eze Chikamnayo, promised to justify the confidence reposed in them by the Governor by bringing to fruition the policies and programmes of the state government.

The Oaths of Office and Allegiance were administered on the new oppointees by the Solicitor-General and Permanent Secretary of the Ministry of Justice, Barr Uzoamaka Ikonne while the deputy Governor, Sir Ude Okochukwu, the former senate president, Senator Adolphus Wabara among other top government functionaries were present during the swearing-in ceremony.