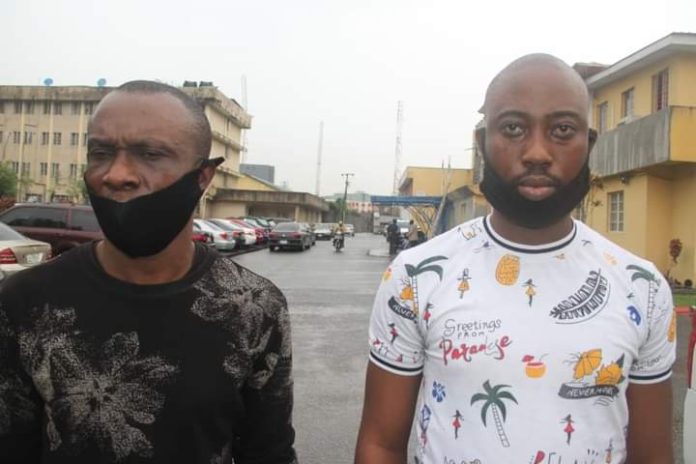 The Lagos Zonal Office of the Economic and Financial Crimes, EFCC, today September 24, 2020 secured the conviction and sentencing of two oil thieves, Jacob Momodu and Onutu Anthony, to three years imprisonment each before Justice I. N. Oweibo of the Federal High Court sitting in Ikoyi, Lagos.

The convicts were arraigned on a three-count charge bordering on dealing in petroleum product without appropriate license, after they were arrested by officers of the Nigerian Navy and handed over to the Commission for investigation.

One of the counts reads: “ That you, Jacob Momodu and Onutu Anthony, on the 21st day of January, 2020 in Lagos, within the jurisdiction of this Honourable Court, conspired amongst yourselves to commit an offence to wit: dealing in 100 metric tonnes of Automotive Gas Oil (AGO) without appropriate license and thereby committed an offence contrary to Section 3(6) of the Miscellaneous Offences Act, CAP M17, Laws of the Federation of Nigeria 2004 and punishable under Section 1(17) of the same Act.”

They pleaded guilty to the charge when it was read to them.

In view of their pleas, the prosecuting counsel, I.A .Mohammed, reviewed the facts of the case and asked the court to convict the defendants as charged.

Delivering his judgment, Justice Oweibo found the defendants guilty of the offence and sentenced them to one year imprisonment each on counts one, two and three.

The Judge also ordered the convicts to enter into a bond with the EFCC to be of good behaviour and never to be involved in any economic and financial crimes, illegitimate or criminal act within and outside the shores of the Federal Republic of Nigeria

My job is a very difficult one, says Osinbajo