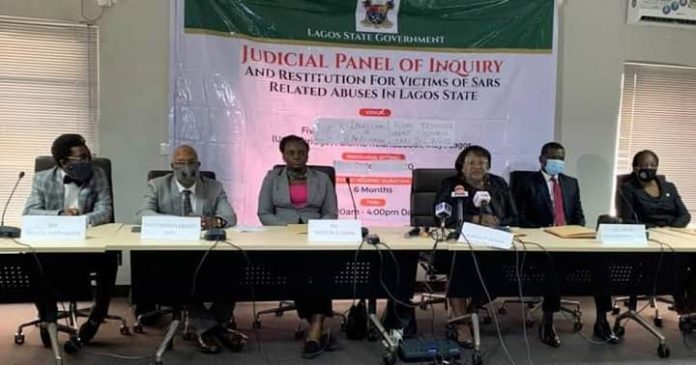 Commander of the 81 Military Intelligence Brigade, Brigadier Ahmed Taiwo, has said that the Nigerian Army is unhappy that the Lagos State Governor, Babajide Sanwo-Olu, denied inviting them to come and restore calm at the Lekki Tollgate area of the state in the heat of the #EndSARS protests.

Brigadier General Taiwo said this on Saturday while addressing members of the Judicial Panel of Inquiry set up by the state government to investigate cases of police brutality.

“The Nigerian army was not happy about two things. The first is his (Governor Sanwo-Olu’s) denial that he asked us to intervene when in actual fact, it was the proper thing to do,” he said.

“He called the Chief of Army Staff and the GOC 81 division and asked for intervention because the police had been overrun”.

The Army Commander made the comments after presenting videos to the panel as part of evidence of the violence that had erupted across the state.

“I’m sure that after we have watched everything, we have seen that he had reasonable grounds to ask the army to intervene,” he added.

Brigadier Taiwo reiterated the army’s earlier position that officers were only deployed on the orders of the state government, particularly in relation to the events of October 20.

But on his part, the governor has yet to make any definite statements about who ordered the deployment or the shootings by the army.

At some point, he attributed the unfortunate incident to ”forces beyond his control” – a situation which has left many Nigerians puzzled over the facts of the matter.

Also in an interview with CNN, the governor said: “from the footage that we could see, because there were camera’s at that facility, it seemed to me that they will be men in military uniform which should be the Nigerian Army.”

When asked further if military forces ordered the shooting of the peaceful protesters, he said: “yes, they were there, that’s what the footage shows”.

Viral eyewitness videos from the scene of the shooting had shown several persons who sustained gunshot wounds, raising fears of multiple fatalities.

But contrary to what had been widely reported, the governor said only two persons are confirmed to have died from the incident so far.

“What has happened is, there have been so many footages that people have shown but we have not seen bodies.

“We’ve not seen relatives, we have not seen anybody truly coming up to say indeed I am a father or mother to someone and I cannot find that person.

“I have been to the ground and there’s no scratch of blood anywhere”.

The judicial panel which was set up nearly three weeks ago, is expected to look into the case, as well as other cases of police brutality with a view to ensuring justice for the victims.

In previous sittings, some survivors have come forward to share grisly details of their encounters in the hands of the rogue officials of the now-defunct unit at the heart of the protests – the Special Anti-Robbery Squad (SARS).

One of the victims narrated how he had spent over a month in detention, and he was tortured to the point where he lost two of his teeth.

Another person said he had been thrown off a story-building and was now confined to a wheelchair after he broke his spine, while a woman alleged that she had lost pregnancies.

“I don’t trust anybody except my wife and children” Amaechi