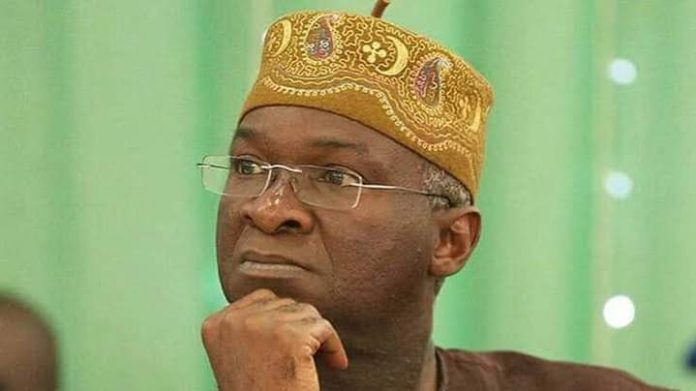 The Peoples Democratic Party (PDP) has asked the Minister of Works and Housing, Babatunde Fashola, not to hide under the disagreements and confusion in his party over 2023 election, to divert attention from reports of how N4.6 billion public fund was diverted into private bank accounts during his tenure as Minister of Power, Works and Housing.

The PDP however describes as disheartening that a highly respected minister like Fashola has failed to explain how such amount of money was allegedly diverted through surreptitious payments, in 654 tranches to 21 private bank accounts in a space of two months; a situation which highlights the level of rot in that ministry in the years of its existence under his watch.

Fashola has failed to respond to Nigerians inquisitions on how he allegedly oversaw such a corrupt system, which points to why our nation’s power, housing and road infrastructure sector had remained in shambles despite the huge resources allocated during the tenure.

Instead, what we see are attempts to use primordial discussion related to disagreements in the APC to divert attention from the fraud allegation.

It is rather pathetic that Fashola is still in his political pipe dream under a rejected All Progressives Congress (APC) when the people have moved on even as Nigerians of goodwill are already rallying on the platform of our party for solutions to the myriads of problems brought upon our nation by the APC.

The PDP however notes Fashola’s description of political parties in the mould of the APC as “clubs”, which further confirmed that the APC is not out for governance but a power-grabbing platform of self-centered individuals; the reason our nation has been in a dire strait since the last five years.

The PDP invites the public to note Fashola’s assertion that Nigerians can only vote for a party that fulfills its promises.

This statement is an indictment on the APC and justifies the decision by Nigerians to distance themselves from that party.

Moreover, the PDP holds the constant reference to our party by APC leaders, including Fashola, as a direct demonstration of their admission that our party is the only platform that can return hope and direction to Nigerians, particularly, the youths.

Nevertheless, our party charges the Minister of Works and Housing to leave the issue of 2023 and immediately address the allegation of fraud hanging around his tenure as minister of power, works and housing.

Bende 2019: House on the Rock Overseer Paul Adefarasin Prays For...