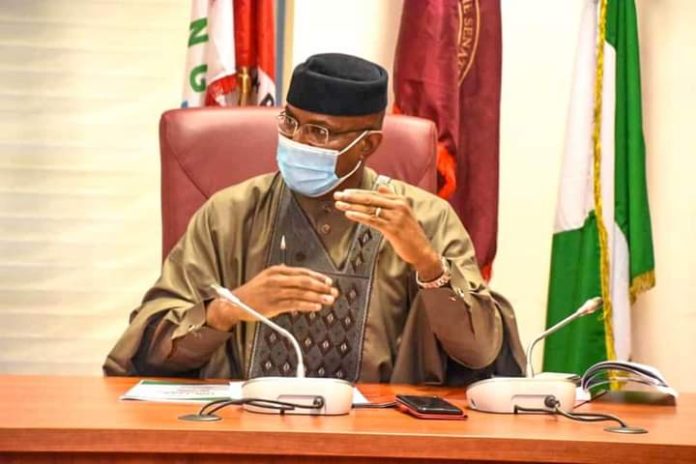 Those agigating for a brand new Constitution in Nigeria may have to perish the thought as the National Assembly lacks the powers to do so, Deputy President of the Senate, Senator Ovie Omo-Agege has said.

Speaking when he hosted members of Alliance of Nigerian Patriots in Abuja, Omo-Agege who chairs the Senate Adhoc Committee on Constitution Review, stressed that the National Assembly has no powers to replace the current Constitution but can only amend same.

The delegation was led by Ambassador Umunna Orjiako.

Citing advanced democracies like the United States of America where Nigeria’s presidential system of government is fashioned after as well as Sections 8 and 9 of the 1999 Constitution (as amended), the lawmaker said what is obtainable is piecemeal alteration of the Constitution.

He, therefore, urged those calling for a brand new Constitution to channel their energy towards participating actively in the ongoing amendment of the Constitution by the Ninth Assembly.

He said: “One of the issues you raised is the replacement of the 1999 Constitution. I am not so sure that we as a Parliament have the power to replace the Constitution. We can only make amendments. And it is explicit in Sections 8 and 9 of the Constitution on how we can do that and the requisite number of votes required.

“I say that because there are some top attorneys in this country, who for some reason, keep saying that we don’t even need any of this, that we should just bring a new Constitution. We can’t do that. What we are mandated to do by law is to look at those provisions and bring them up-to-date with global best practices, especially to the extent that it tallies with the views of the majority of Nigerians. So we are not in a position to replace this Constitution but we can only amend.

“But, like I said, most of the issues you have raised here, like zones replacing states, that’s another euphemism for going back to the regions. We will look into that if that is what majority of our people want.

“You talked about devolution of powers. The preponderance of views we have received so far is that those 68 items are very wide and need to shed some weight and move them to the Concurrent Legislative List”.

He also expressed his opinion on the call by some persons for the scrapping of the upper legislative chamber.

According to him, the country cannot practise unicameral legislature considering its large population.

“One of the issues raised by #EndSARS Protesters was that they should abolish the Senate and merge us with the House of Representatives. We are not in a position to do that. Mr. President is not even in a position to do that as well. Because they believe that he can just by fiat say ‘Senate bye bye. it will now be a National Assembly made up of only the House of Representatives’.

“But, as I said at a different forum, the President does not have such powers and I am not so sure that even we can legislate out the National Assembly,” he said.

Concluding, he tasked the group to reach out to other stakeholders across the country.

Earlier, Ambassador Orjiakor called for the reconfiguration of the present 36 states structure into six zones as federating units, drastic cut in the Exclusive Legislative List and expansion of the Concurrent Legislative List, reform of the National Assembly to a hybrid Presidential and Westminster systems, abolition of security votes to be replaced by regular security budget allocations and electoral reforms to ensure a truly independent INEC.

He also called for limited immunity for entitled public officers in the Executive branch of government, provision for independent candidacy in all elections, creating a consensual balance between meritocracy and federal character among others.

Yomi Odunuga,
Special Adviser, Media and Publicity, to the Deputy President of the Senate.

Buhari To Handover To South West In 2023 – Fashola