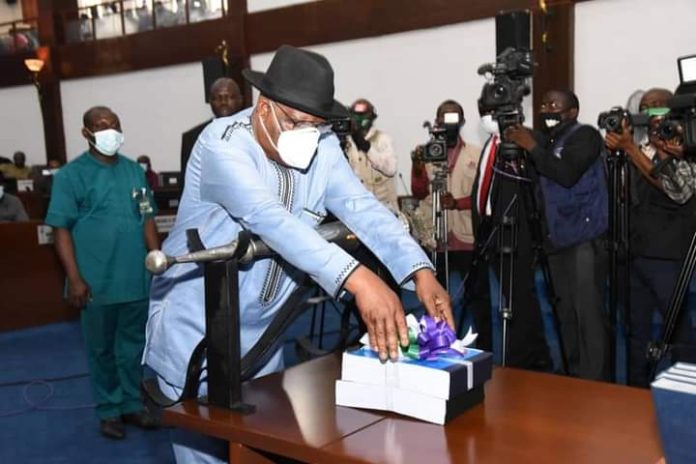 Rivers State Governor, Nyesom Ezenwo Wike, has presented a N448,660,773,476 billion Budget, for 2021 fiscal year to the state’s House of Assembly for consideration and approval.

Governor Wike, while presenting the Budget to lawmakers at the State House of Assembly in Port Harcourt on Wednesday said the N448,660,773,476 budget for 2021 fiscal year represents more than 20% increase over the 2020 Revised Budget of N300billion.

The governor explained that the capital budget will be deployed to advance economic growth and social progress by targeting and prioritizing investments.

He said the sum of N82,957,295,248.81 has been provided for the provision of infrastructure, including roads, bridges, and completion of flyover projects at Okoro-Nu-Odo, Rumuola, Rumuogba, and Port Harcourt GRA junction.

“We will also deliver the Ogoni – Andoni – Opobo unity road, the Eastern bypass dualization, 6th and 7th flyover projects and the Wakama road as well as all other ongoing rural roads in our communities and local government areas across the State.”

The governor stated that over N6 billion Naira has been provided in the 2021 budget to stimulate economic growth through investments in commerce, culture and tourism, mineral resource development as well as address environmental challenges to improve the quality of life of all residents.

Similarly, he said N13,861,407,451.97 has been provided to fund various social and economic investment schemes to support the development of small and medium scale businesses as part of efforts to create jobs and reduce poverty.

The governor noted that economic challenges of the COVD-19 pandemic clearly exposed the State vulnerability to food insecurity. Hence, the sum of N16,107,080,000.00 will be spent on targeted investments in the agriculture value chain in a bid to create employment and enhance collective food security of the state.

In cognizance that quality public education remains the key to breaking cycles of poverty, the governor said his administration has decided to prioritize education in the 2021 budget with the provision of N30,000,000,00 to boost infrastructure, enhance access and retention rates and improve educational outcomes in our schools throughout the State.

The governor hinted that the State government has provided N25,111,728,000.00 for health care services for 2021 fiscal year. According to him, government will focus on completing the four zonal referral hospitals at Ahoada, Bori, Degema, Okehi and Omoku, which are all at advanced stages of completion.

Governor Wike, explained that the 2021 budget will also prioritizes security and sustains the existing efforts in combating insecurity and keeping residents safe and secure.

“From inception, this administration has prioritized the payment of salaries and pensions and I wish to assure our workers, including the proposed five thousand new enlistments, that they will receive their salaries as when due in 2021. Ministries, Departments and Agencies are also assured of prompt release of overheads to enable them run effectively and deliver services to the people.”

The governor, explained that Nigeria is currently in its second recession in five years with headline inflation at 14 per cent. However, he said the Federal Government has projected that the country will exit the recession in the first quarter of 2021.

He expressed optimism that the measures in the budget will place the State on a stronger economic footing towards achieving the new Rivers vision for a peaceful, secure, inclusive and prosperous society.

He said the budget will be funded from Statutory Allocation, 13% Oil Mineral Fund, internally generated revenue, value added tax, refunds for federal projects and excess crude oil deductions, domestic and foreign credit as well as grants from our development partners.

Commenting on the performance of the 2020 budget, Governor Wike disclosed that at the end of October 2020, the total net revenue collected by the State was N226,522,031,922.45, representing about 75 percent overall proportional performance.

“While receipts from federal allocations declined internally generated revenue overshot the budget projections by over twenty billion naira (N20,000,000,000.00) despite the pause we placed on the payment of taxes by the informal sector and small businesses.”

The Speaker, Ikuinyi Ibani, lauded Governor Wike’s commitment towards transforming the State’s economy. According to him, generations to come will live to acknowledge his good deeds.

The Speaker further assured Governor Wike that the State lawmakers would diligently consider and pass the budget to facilitate the continued development of the state.