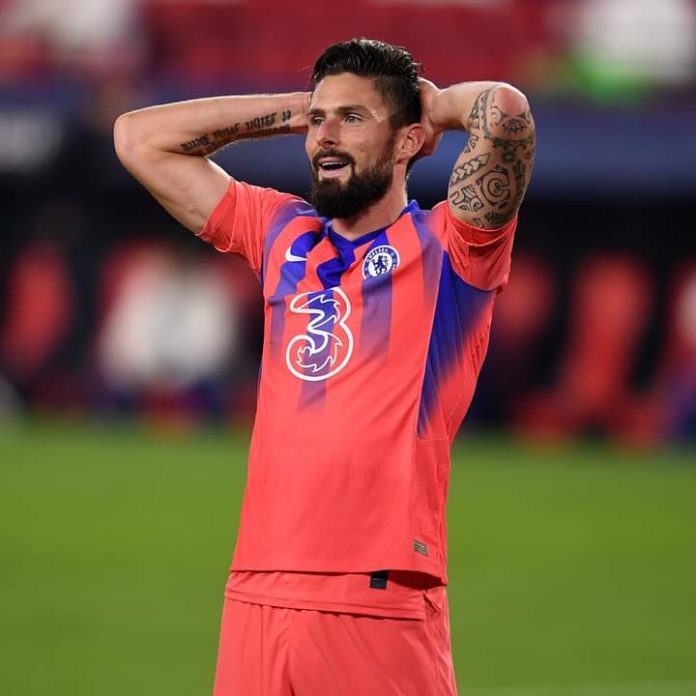 The Frenchman enjoyed a field day against his La Liga opponents to etch his name into European football history on Wednesday evening.

Chelsea forward Olivier Giroud has become the oldest player to score a Champions League hat-trick on a record breaking night, after scoring all four of his side’s goals in their win over Sevilla on Wednesday.

Just over two months since his 34th birthday, the France international put his name into the history books as he hit top gear for the Blues after being given a rare start by Frank Lampard.

Giroud’s first goal came after just eight minutes following some incisive build-up play from Kai Havertz. Giroud’s second then came via a chip in the 55th minute after Jorginho and Mateo Kovacic created a chance for their forward.

A historic hat-trick was then wrapped up in the 75th minute as he got on the end of a cross from N’Golo Kante. Not done there, Giroud bagged his fourth goal of the night in the 84th minute after winning and converting a penalty.

While Giroud is the oldest to score a hat-trick in the Champions League, Ferenc Puskas did score three goals in the European Cup aged 38 years and 173 days in 1965.

Giroud is now just the second Frenchman to score two Champions League hat-tricks, with only Real Madrid’s Karim Benzema the other player to do so.

Lampard was the last player to score four goals in a single game for Chelsea with the Blues current manager achieving that feat back in March 2010 against Aston Villa.

Giroud, who was substituted after scoring his fourth goal against Sevilla, has struggled for regular game time at Stamford Bridge this season and recently hinted a move away in January could be on the cards.

“It’s worrying. I thought I still had a role to play at Chelsea but my playing time is getting reduced a lot. It’s going to have to change or a decision must be made,” Giroud told Telefoot last month. “I am clear-headed about my situation: I will have to make a decision in January. I hope to make the right one, as I have always done.”

Chelsea’s big win against Sevilla has secured them top spot in Group E with one game to play with Lampard’s side dropping just two points in the competition to date.

Chelsea vs Villarreal: We are playing for title – Unai Emery...