Home PUO NEWS Imo North Senatorial Bye-Election: “I Am Not Afraid, So Don’t Be Afraid,... 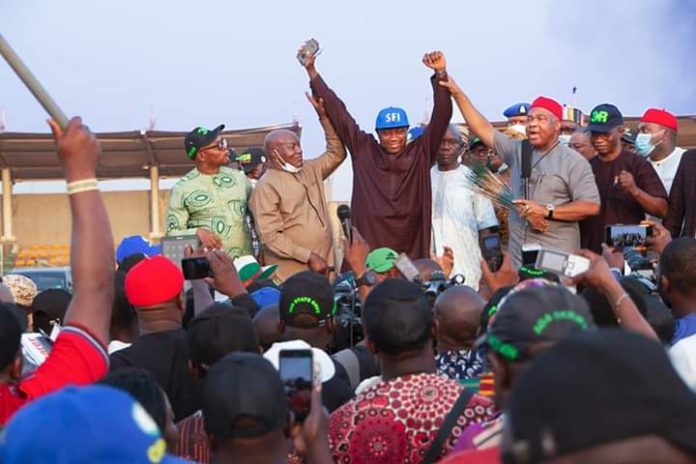 The All Progressive Congress APC, today had their grand finale of the campaign for the Imo North Senatorial Bye-Election.

Senator Hope Uzodimma, the capacity Governor of Imo State and the Political leader of All Progressive Congress APC at the grand finale of the campaign of APC Imo North Senatorial Bye-Election, spoke with great confidence assuring Imo North people of the capacity of the rulling party APC and the competent personality of the authentic candidate, Frank Ibezim.

Speaking to the enormous crowd of the APC and Sir Frank Ibezim’s supporters, Governor Uzodimma urged them to come out enmass on Saturday 5th of December, 2020 to vote for APC.

“I am not afraid, so don’t be afraid, vote for APC and Frank Ibezim is the party’s choice. – Uzodimma stated.

The Imo APC Chairman, Chief Nlemigbo stressed that there is only one APC party, One party leader at the Federal, President Buhari, one state leader, Senator Hope Uzodimma, and one APC Imo North Senatorial Bye-Election candidate, Mr Frank Ibezim. He urged the massive crowd of APC supporters at the grand finale to vote for the rulling party, APC with Frank Ibezim as the candidate.

The Speaker, Imo House of Assembly, Rt
Hon. Emeziem, House members representing Imo North, the IMC chairmen of the Imo North, Stakeholders of Imo North like Chief Tony Chukwu and many more at the party event.