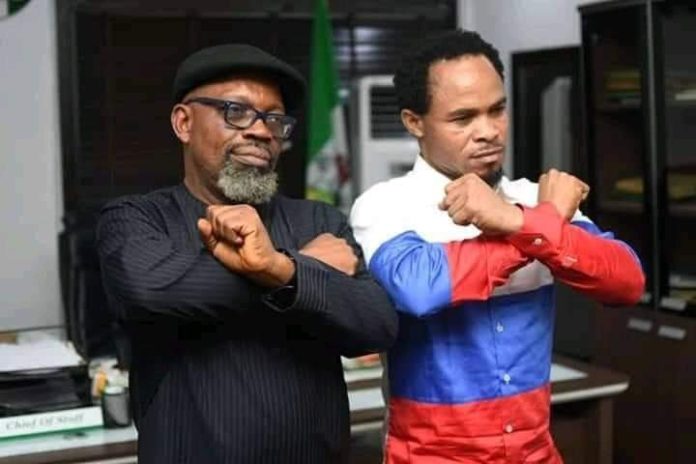 Abia State Chapter of the All Progressives Congress (APC) received the news of the suspension of Barr. ACB Agbazuere, Chief of Staff to Gov. Okezie Ikpeazu with surprise because the action that led to the suspension demands that he should be sacked immediately.

We’ve been complaining about the irrationality of the officials of this PDP led administration, but people don’t understand. What our people saw on video is just a tip of the iceberg to their squandermania nature.

What the Chief of Staff to Governor Okezie Ikpeazu did was a huge slap on the faces of Abia Health Workers and other Government workers that are being owed backlogs of salaries.

He has insulted workers at HMB, Abia Poly and other people who are dying of hunger. He should be sacked with his sack letter made public.

Nobody has right to mock Abians in that manner as he did. So, the Government has money to waste while our people are dying of hunger with our state looking like war ravaged zone.

The Chief of Staff has money to throw around while our roads are now death traps? What manner of wickedness is this? We’re calling for two things today;

Gov. Okezie Ikpeazu should sack his Chief of Staff without further delay, and let the Government render an unreserved apology to Abians between today Sunday and tomorrow Monday because this is extremely provoking.

Let nobody get it twisted, we don’t have any problem with Odumeje. He’s our brother and there’s nobody is South East that’s not aware of that name.

But even Prophet Odumeje would have not been happy to see such money thrown at him if he’s aware of what Abia workers are passing through in the hands of this Government.

I’m sure if Odumeje had visited Aba, and see all the terrible roads in Aba, he would asked Gov. Ikpeazu’s Chief of Staff to keep his money because the Odumeje we all have been seeing is not really interested in such.

Governor Ikpeazu’s Chief of Staff just decided to spend money that’s not his in a reckless form and should be made to face the music.