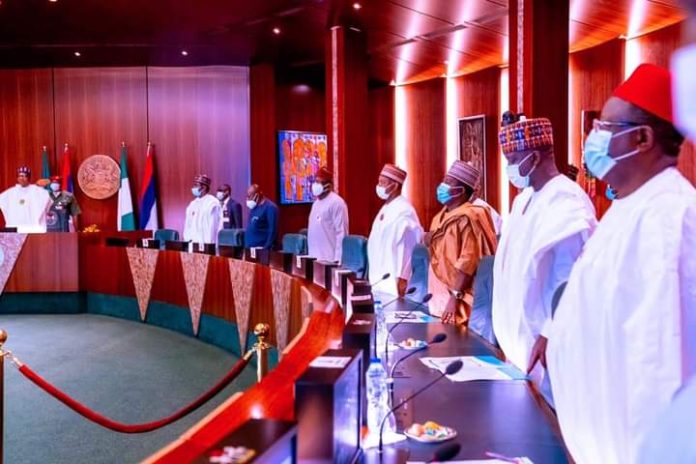 President Muhammadu Buhari Tuesday in Abuja urged members of the governing party, All Progressives Congress (APC) to collectively work towards the sustenance of peace, and promotion of more understanding within the party, with a view to consolidating on earlier successes and winning new members.

In his remarks at the virtual Emergency National Executive Council Meeting of the APC at the State House, President Buhari said the decision of the party leadership to dissolve the National Working Committee and constitute a 13-member Caretaker/Extra-ordinary Convention Planning Committee, June 25, 2020, was well conceived as party members now enjoy new atmosphere of peace.

“Healthy debates are now taking place and the potential for organs of the party to affirm majority positions as the decision of the party is now possible. What is required now is for all of us, as leaders of the party, to maintain discipline and ensure that this new momentum is protected, sustained and that decisions of party organs are respected by every member.

“Despite the challenge to restore peace in the party and the series of elections at hand, the fact that we have gained more members and that we are not losing members to the opposition under the present interim leadership indicates improvement for the party.

“In fact, we have begun to win back our members who left us, and other notable political leaders are being attracted to our party. In this regard, I hereby acknowledge the return of many party stalwarts and their supporters, and particularly, His Excellency, David Umahi, Governor of Ebonyi State. This confirms that we are indeed making progress as a party of choice for Nigerians as we move towards the resolution of our leadership challenges.’’

The President said the Chairman of the Caretaker Committee, His Excellency, Mai Mala Buni, had presented a progress report to the meeting, which should guide deliberations, and strengthen capacity of leaders of the party towards resolving all outstanding issues.

“We should remind ourselves about the challenges facing us culminating in our decision to set up the 13-member Caretaker/Extra-ordinary Convention Planning Committee (CECPC) on 25th June, 2020, with the specific mandate of restoring peace in the Party, conducting a bottom up membership registration, organizing a national convention and mobilizing the party for coming elections.
“I have received periodic briefings by the Chairman of the CECPC, as well as other leaders of the Party. I am convinced that in the last five months since the appointment of the Caretaker Committee, the initiatives taken have brought a remarkably new atmosphere of hope in the party.’’

President Buhari appealed to all members to try and make required sacrifices that will collectively restore a progressive and democratic political party, which can nurture and give expression to the dream of building a strong, united and developed Nigeria.

The President reminded party members of the principles of maturity and respect that founded the party and spurred it to victory in 2015:

“In those times, decisions reached at both formal and informal consultations were respected. We trusted initiatives taken and believed that they were required to produce the needed political platform that could guarantee electoral victory. Every one of us as leaders ensured that those decisions were respected.

“I have, through consultations with the Chairman of the Caretaker Committee and other leaders of the Party, agreed that our challenges in the party require that we take steps to rebuild the Party from Ward to National levels. The initiative to carry out membership registration/revalidation is therefore a necessary step. Membership registration/revalidation will lay the foundation for re-organizing our leadership, from Ward to Local Government, State and National levels.’’

He said party’s NEC had a responsibility “to adopt, and dispassionately consider all the proposals submitted by the Caretaker Committee and grant all the necessary approvals requested to rebuild the party. To this end, I will be moving some resolutions for our consideration and approval.’’
Adding:
“I believe that as leaders, our shared vision is to ensure that we are able to produce leaders that will not inherit any of the problems that led to the decision to dissolve our last National Working Committee. There should be no debate about the fact that we all want to have a united leadership for our party, APC, at all levels. We need such leaders to be able to manage big challenges that always come with elections.”
In his remarks, the Chairman of the Caretaker Committee said the reconciliation effort in the party had yielded positive results, with many old members returning, and new members being recorded, most recently the Governor of Ebonyi State.
Following the President’s instructions, Buni noted that almost all pending cases in courts instituted by members had been withdrawn to create “neutral ground’’ for discussions, while a time table for membership registration and revalidation exercise will be released, after initial sensitization.
“Many Nigerians have turned 18 and they will be interested in joining our party,’’ the Govenor of Yobe State added.
Among resolutions adopted at the NEC meeting were: extension of the tenure of the Caretaker Committee by another six months, to last till June 30, 2021, expulsion of Mr Hilliard Etta, former Vice Chairman, South South, for not heeding the directive of the party that all legal cases be withdrawn from the courts, granting of waiver to those who have joined, or want to join the APC, and dissolution of party structures at polling unit, ward, local government, zonal, state levels, with members of the dissolved executive to serve as caretaker members.