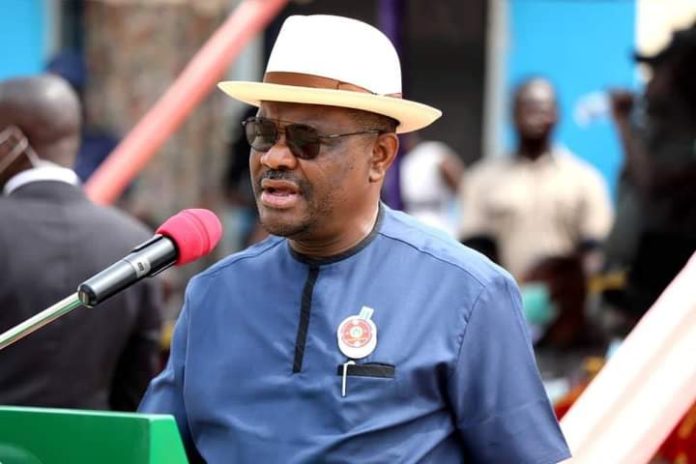 Rivers State Governor, Nyesom Ezenwo Wike says the completion of the Opobo axis of the Ogoni-Andoni-Opobo Unity road, which will attract development to Opobo kingdom, is top priority to his administration.

Governor Wike gave the assurance at the ceremony to mark the 150 years anniversary of the establishment of Opobo Kingdom in Opobo Town on Monday.

The governor, who expressed delight that Opobo people and friends could drive by road to participate in the 150 years anniversary of the kingdom, assured that the road will be completed and commissioned in January 2021.

“As you’re coming from the Ogoni area, you’ll see that we have finished the first phase of Sakpenwa -Bori road; full dualisation. Now, we believe that the second phase will take it to Kono with street lights installed.

“That will ease movement and reduce the level of crime in that place. We are happy that you can drive from Bori and within five minutes, you’re heading to Opobo.

“When that road is completed, it will bring development. I’m glad that I made a promise to the people of Opobo. We believe that by ending of January 2021, that we will come back to commission the road.

The governor also noted the efforts of federal lawmaker who represents Andoni-Opobo -Nkoro federal constituency, Awaji-Inombek Abiante in connecting Opobo kingdom to the national grid in a bid to solve the age long problem of lack of electricity in the area.

Governor Wike said his administration will continue to support developmental plans of the kingdom that will make life easy for them.

“I’m happy with the move to connect you to the national grid. That project, is a constituency project of one of your own who represents Andoni/ Opobo-Nkoro Federal Constituency, that is Awaji-Inombek Abiante.

“It is important for us to elect those who have commitment, who believe in the development of the people and that young man has shown that connecting Opobo to National Grid is very important”.

The governor also donated 50miliion Naira to support the building of a befitting palace for king Jaja of Opobo.

Amayanabo of Opobo Kingdom, King Dandeson Douglas Jaja said the sitting of Opobo on the banks of the Imo River was well calculated plan in 1870, because the kingdom strategically became an important commercial settlement to compete with Lagos in volume of Nigerian International Trade.

King Jaja, who is also the Chairman of Rivers State Traditional Rulers Council, said in the wake of World War 11, the British closed the Opobo sea port, which destroyed the commercial strength of Opobo kingdom. According to him, the Nigeria Government has since failed to acknowledge the subsisting commercial potentials of Opobo.

“The road, today, we are glad to acknowledge, opens up a new page in the development process of Opobo, a page that will see our youths, instead of migrating to Port Harcourt and other cities, will be attracted to remain here because they can be gainfully employed as well as enjoy the befits of modern living”.

Rivers State Commissioner for Water Resources, Dr. Tamunosisi Gogo Jaja said Opobo people had lived together in peace without violent attacks on each other during and after the 20 years of legal war in the kingdom.

Dr. Gogo-Jaja said the people of Opobo particularly thanked Governor Wike for demonstrating love towards them by his commitment to complete the Opobo axis of the Ogoni Unity Road to enable them drive him by road.

Talks on for Access Bank to acquire Diamond Bank