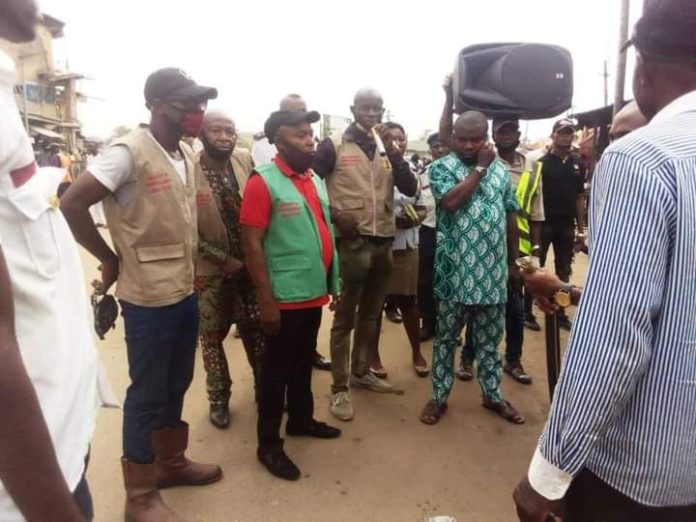 Street traders at Obikabia and Opobo junctions, Ogbor Hill in Aba, have been given seven days to vacate the streets and move into approved markets in the city.

The State Commissioner for Environment , Mr Tony Nwamuo, who gave the ultimatum when he led a taskforce team comprising the ministry of environment, APUMA and TIMAAS to the locations also called on the management of Crunchies, an eatery In Aba, and the owner of a fish pond within the area to work out proper ways of channelling their waste water to stop its nuisance to the public as well as desilt their surrounding drainage systems.

Mr Nwamuo disclosed that the visit was in compliance with the orders of the state Governor, Dr Okezie Ikpeazu, to restore sanity within that axis where the illicit activities of traders and Keke operators are causing much damage to the newly constructed roads. He emphasised that the state government will not tolerate such destructive and unpatriotic acts but expects everyone to join hands with the government in its well acknowledged efforts to improve facilities and aesthetics of the state.

Contributing, the General Manager of Abia State Public Utilities Maintenance Agency (APUMA), Mr Abraham Akpulonu, and his Traffic and Indiscipline Management Agency of Abia State (TIMASS) counterpart, Commander Bright Ikeokwu, revealed that the Agencies are embarking on clearing the city of illegal structures along the junctions and grassing of the areas while urging the people including Keke operators to obey the vacation order within the stipulated period because work will commence in the affected areas immediately and no form of hindrance by any person or groups of persons will be condoned.

Speaking with newsmen, one of the traders Mrs Calista Ananaba revealed that their annual rent for each shop is Forty Five Thousand Naira while Mr Chinyeaka Azubuike and Mr Young Nwangwa appealed to the state government to address the illegal loading of passengers at the junction.