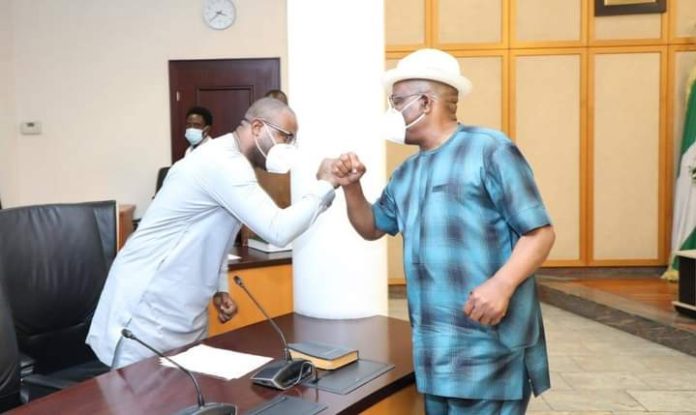 Rivers State governor, Nyesom Ezenwo Wike, says despite the inauguration of the advisory council of the Niger Delta Development Commission (NDDC), oil producing state governors are still sidelined in the affairs of the intervention agency.

The governor noted that because the governing party dictates what happens in the NDDC, the commission now acts like a state on its own and refusing to interface with the Governors of the oil producing States to strategically develop the Niger Delta region.

He stated this when members of the House of Representatives Committee on NDDC led by its chairman, Hon (Dr.) Olubunmi Tunji-Ojo paid him a courtesy visit at the Government House, Port Harcourt on Thursday.

Governor Wike explained that contrary to assumption that governors of the Niger Delta are critical stakeholders in the affairs of the NDDC, they are not in the true sense of it.

According to him, since the inauguration of the NDDC advisory council last year, the present federal government has ensured that the governors are sidelined in the affairs of the commission.

“Even when we are inaugurated, we were not involved in anything that happens in NDDC. Which is most unfortunate.”

He further continued: “NDDC is like a state on its own without working with the State government and why is it so. It is so because the states of NDDC are controlled by the opposition party therefore there is no need to consult with them.”

The governor explained that in a bid to ensure NDDC does not embark on indiscriminate execution of projects that often distort the state developmental agenda, the Rivers State government recently obtained a court order that prohibits the commission from carrying out projects without the consent of the state government.

Governor Wike urged the National Assembly to be resolute in its oversight function by ensuring that the NDDC stops frittering the resources meant for the development of the Niger Delta region on building roads in Army barracks, police stations and spending Billions of Naira to ensure he did not win election.

The governor stated that NDDC and the Rivers State had once agreed to collaborate on a legacy project, but the commission ended up defrauding the State government

The governor said he will continually speak out for the interest of the people of Rivers state. According to him, within one year, he has awarded contracts for construction of eight flyovers and on Wednesday approved over N16 billion for the development of critical infrastructure in the Rivers state University.

“I want the best for my people. They have given me everything in life, so I owe them. It is not what I will make, they have already made me. So what do I offer back.”

Leaders of the delegation and chairman of the committee, Dr. Tunji- Ojo explained that the purpose of the visit is predicated on the fact that Governor Wike is a principal stakeholder in the affairs of NDDC.

Buhari Promises To Re-Professionalize, Re-Equip Military, Thanks Nigerians For Support Against...

Buhari Did Not Attend COAS’s Burial Because of Traffic – Garba...