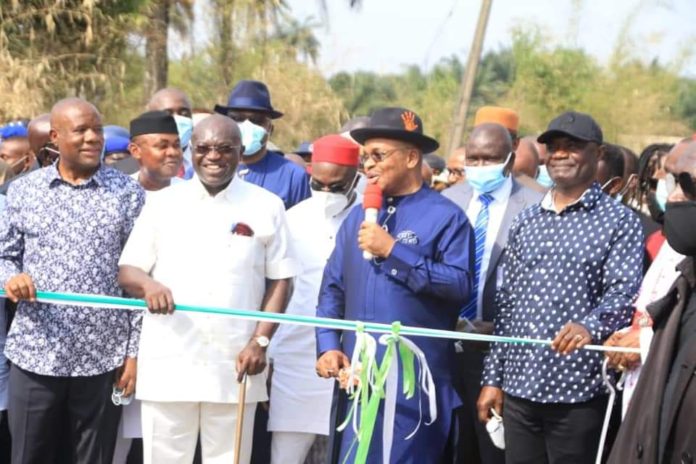 The new 10km Osokwa-Aro Umuejie-Omoba Road, constructed by Governor Okezie Ikpeazu has been commissioned for public use by the Akwa Ibom State Governor, Udom Emmanuel.

Speaking at the ceremony which was in continuation of his Kinetic Abia project inspection and commissioning programme, Abia State Governor, Dr. Okezie Ikpeazu said the road is of great economic importance to the state. He disclosed that the link road gives access to many towns including Umuahia, Aba and links Akwa Ibom and Cross River States.

Dr. Ikpeazu said the road would mutually improve the economic advancement of both Akwa Ibom and Abia and called for more unity and harmonious relationship between the two states.

He said he has learnt a lot from his Akwa Ibom State counterpart, who he described as a transgenerational leader, hence his invitation to him to commission the road.

Commissioning the road which traverses Osisioma and Isiala Ngwa South Local Government Areas of Abia State, the Akwa Ibom State Governor, Udom Emmanuel said he and the entire PDP Governors are proud of Governor Okezie Ikpeazu. He commended Dr Ikpeazu for doing quality roads disclosing that he drove many kilometres from Obingwa to the commissioning ground in Osisioma Ngwa without noticing any pothole.
According to him, that shows the type of administrations PDP Governors run. He encouraged the people to sustain their support for Governor Ikpeazu, urging people to be patient with governments as development takes time.

Governor Emmanuel used the opportunity to disclose that his administration in Akwa Ibom State constructed a 160 metres road to link Akwa Ibom to Arochukwu, Abia State.

Also speaking, the Deputy Governor, Rt Hon. Ude Oko Chukwu, appreciated Governor Ikpeazu for constructing quality roads in Abia State and urged the beneficiaries of the road to protect the roads to ensure that its longevity is guaranteed.

In their separate speeches, the Member representing Obingwa/Osisioma/Ugwunagbo Federal Constituency at the National Assembly, Hon. Solomon Adaelu and his Isiala Ngwa North/South Federal Constituency counterpart, Hon. Darlington Nwokocha expressed their gratitude to the Governor for constructing the road which they said would improve the economy of the host communities of the road and of the entire state.

Also, the State Chairman of Peoples Democratic Party, Rt. Hon. Asiforo Okere saluted the great achievements of the Governor, saying that the PDP is proud of him and described the quality of roads done as what the PDP is known for and appreciated Governors of both Abia and Ákwá Ibom States for delivering democracy dividends to the people.

Speaking, the immediate past Commissioner for Works, Elder Bob Ogu said the economic importance of the road is enormous, assuring that the road would last and urged people to protect it.

Earlier, the Executive Chairman, Isiala Ngwa South, Chief Ikechukwu Anyatonwu, a former Member of the State Assembly and Chairman of Osisioma Ngwa Political Stakeholders Forum, Chief Kingsley Mgbeahuru and Chief Chibuike Onyendilefu, a political stakeholder from Isiala Ngwa South LGA thanked the Governor for the project and expressed their gratitude to the Governor for remembering the long abandoned road. He said constructing the road has further redefined Governor’s plans of creating alternative link roads within LGAs and across to Akwa Ibom State. According to them, posterity would remember him for his giant strides in Abia State. 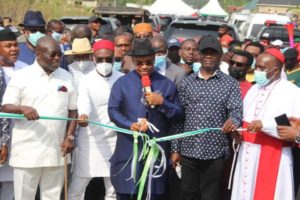 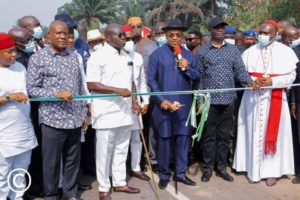