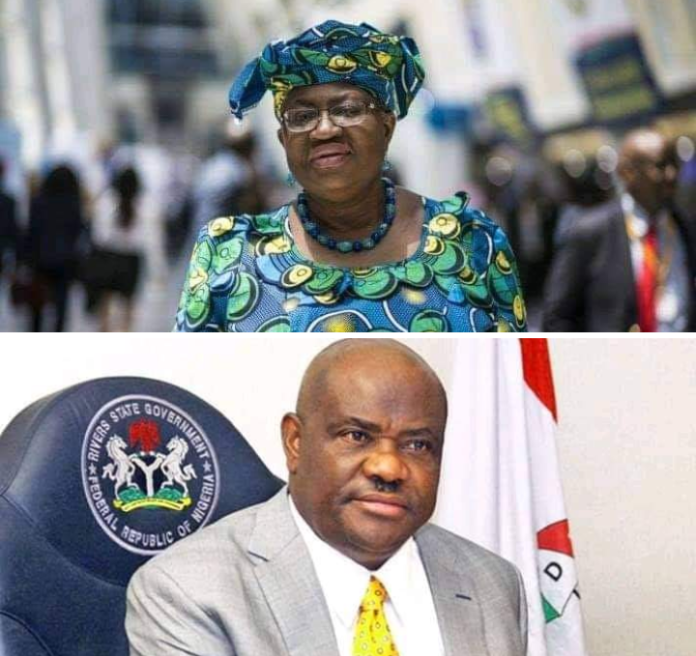 Governor of Rivers State, Nyesom Ezenwo Wike, says the world has entered in a new epoch with the appointment of Dr Ngozi Okonjo-Iweala as the Director-General of the World Trade Organisation (WTO).

Governor Wike, in a statement signed by his Special Assistant on Media, Kelvin Ebiri, said the appointment of Dr Okonjo-Iweala , a one time Minister of Finance and Chairman of President Goodluck Jonathan Economic Team to lead the WTO, is beacon of hope for Nigeria.

The Rivers State governor said he is confident that Dr Okonjo-Iweala, who has distinguished herself as a renowned economist, and contributed to the economic successes of many nations, will usher in a new era in the WTO.

He stated the new Director General of the WTO throughout her career both at the World Bank and as Nigeria’s Minister of Finance, had consistently demonstrated an exceptional taste for transparency, and passion for equity.

“Having served in the Federal Executive Council with Dr Okonjo-Iweala, I am confident that she will remain committed to her principles of transparency, accountability and equity, which the world is yearning for.

“On behalf of the Government and people of Rivers State, I also take this opportunity to extend our heartfelt congratulations to you as a beacon of hope for our dear nation.

Ebonyi to FG: We have no land for cattle ranching

BREAKING: Ondo Government Directs All Schools To Close Back