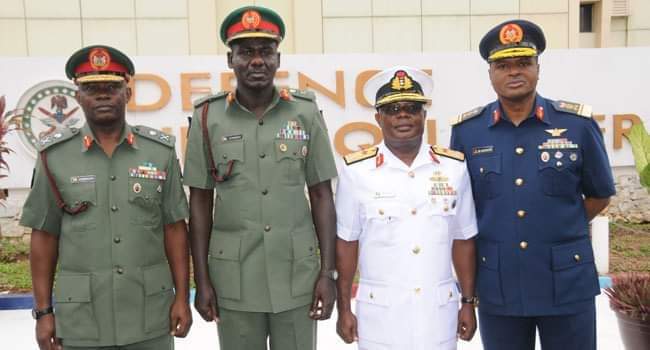 The Senate on Tuesday confirmed the nomination of the immediate past service chiefs as non-career ambassadors, despite criticisms in some quarters.

The Senate Minority Leader Enyinaya Abaribe, however, questioned the nomination and confirmation of the ex-service chiefs when the Senate had on three different occasions called for their sack.

Senator Abaribe also questioned why the petitions against the former service chiefs were dismissed without explanations.

But Senate President Ahmad Lawan dismissed Senator Abaribe’s concerns, ruling that the nomination of the former service chiefs cannot be nullified simply because the upper chamber had called for their sack, noting that this is totally a different assignment.

The Senate President promptly stopped any further debate on the matter.

In his concluding statement, Senator Lawan added that the former service chiefs have served the country to the best of their abilities.

He urged the Executive to utilise their experiences as much as possible and they should be posted to countries where they will be useful.

President Muhammadu Buhari had earlier on February 4, nominated the immediate past service chiefs of the nation as ambassadors.

The former service chiefs were appointed as non-career ambassadors-designate a week after their replacement with new officers.

They were said to have tendered their resignation from their positions amid heightened calls that they should be sacked due to the disturbing rate of insecurity in the country.

Senate Screening Of Ex-Service Chiefs
On February 18, the former service chiefs were screened by the Senate Committee on Foreign Affairs.